This week is British Science Week, and to mark the occasion
the Women’s Engineering Society at Loughborough University have launched a poster campaign across campus utilising images and information courtesy of our very own archives.

A Pioneering Woman of Loughborough showcases the life and work of two remarkable Alumni who both graduated from the then Loughborough Engineering College in 1922 – Verena Holmes and Claudia Parsons.

Verena Holmes became the first woman to be elected to the prestigious Institute of Mechanical Engineers in 1924, and was President of the Women’s Engineering Society in 1931.

Along with Verena Holmes and Dorothea Travers, Claudia Parsons was one of the first women to be admitted to the Loughborough Engineering College, and went on to become the first woman as well to circumnavigate the world in 1938.

In her honour, the University launched a series of Memorial Lectures aimed at raising the profile of women working in science, technology, engineering and mathematics, given by such luminaries as
Maggie Aderin Pocock, Kate Bellingham, Helen Czers and Jessica Wade, who delivered last year’s lecture.

The University further honoured Claudia by naming its newest Hall of Residence (to be opened this September) after her.

The photographs and accompanying information detailed for the campaign were provided by the University Archivist Jenny Clark, who is based here in the Library. 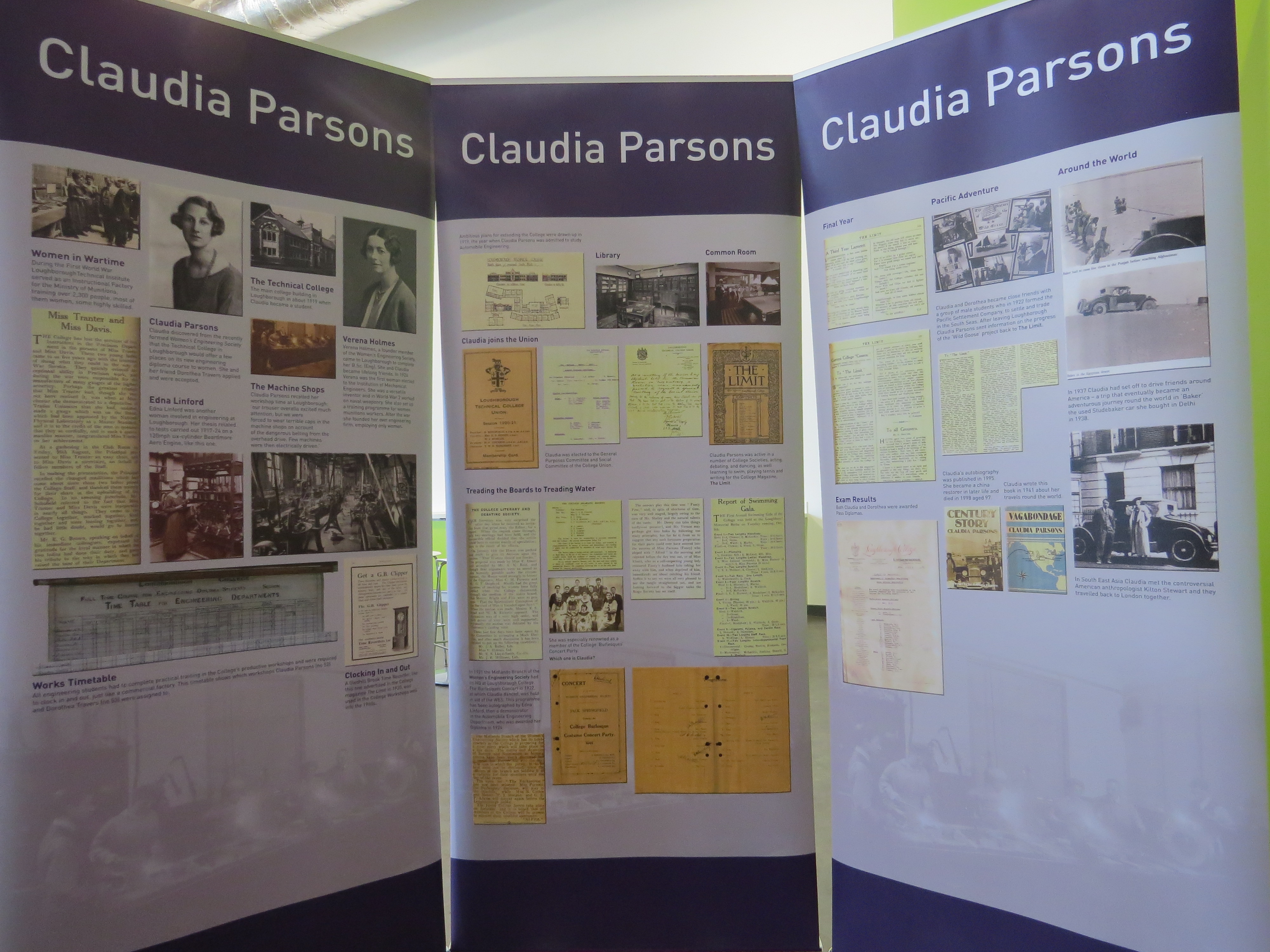 The Annual Claudia Parsons Memorial Lecture, given on Monday 13th March by Dr Emily Grossman commemorates one of first women in the country to graduate in engineering, and was accompanied by a display created by University Archivist Jenny Clark.

Claudia Parsons studied Automobile Engineering at Loughborough College, the predecessor of the University, from 1919-22.  From documents held in the University Archives we know exactly which Workshops she was assigned to for practical engineering training and how she fared in her exams. Claudia was also an active member of the first College Union and took an enthusiastic part in College life, acting, dancing, and learning to swim, as she recounts in her autobiography Century Story.

In the 1930s  a trip she began by chauffering friends around America turned  into a motor  journey round the world and many adventures. Claudia thus became the first woman to circumnavigate the world by car and later published a book Vagabondage about it. During the Second World War Claudia Parsons worked in a munitions factory and later at the Ministry of Labour.

Previous Claudia Parsons Lectures have been given by Maggie Aderin Pocock, Kate Bellingham and Helen Czerski. A selection of pictures of the display can be found on the Library’s Facebook page below: 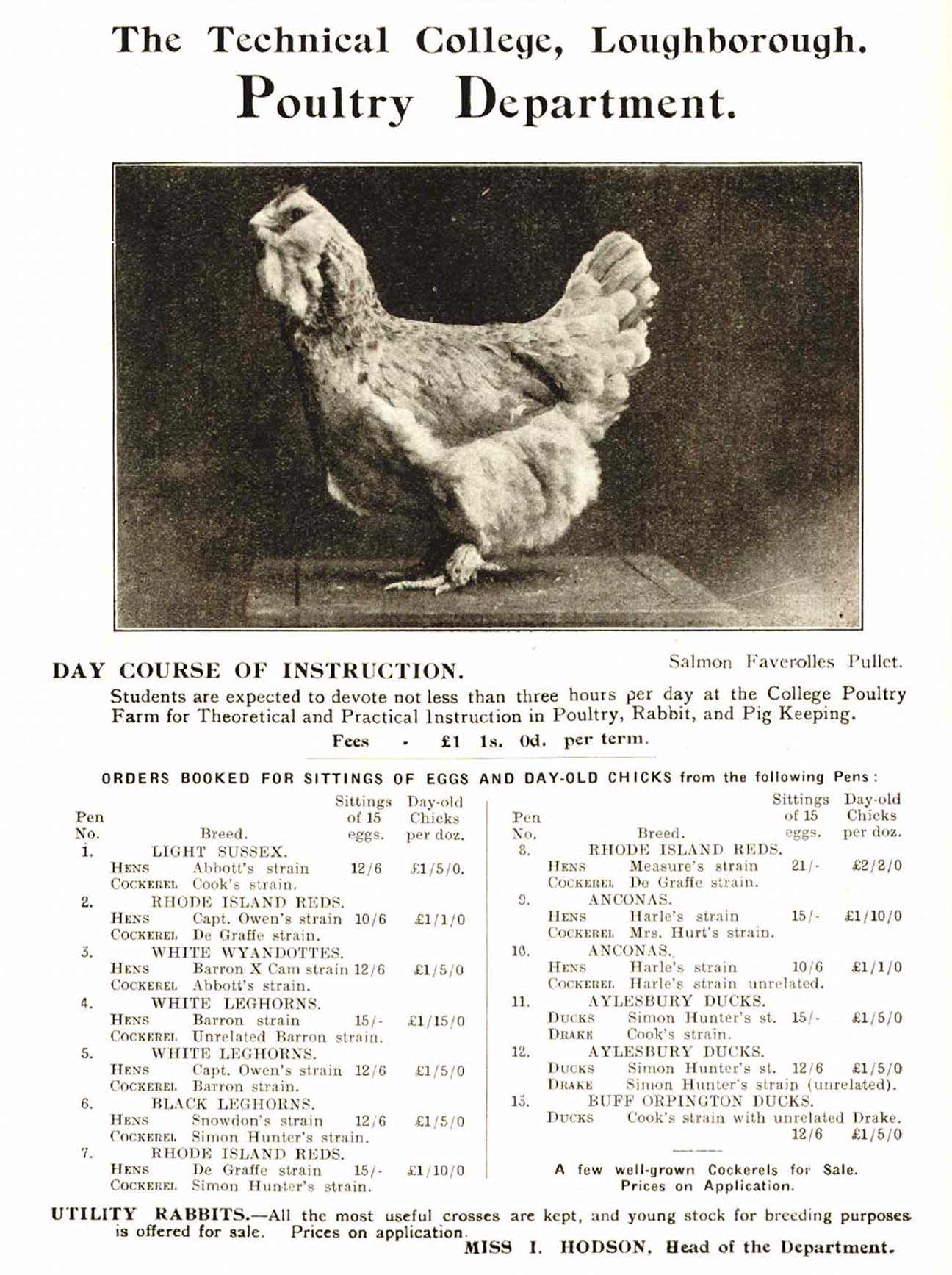 In her latest online article for the Loughborough History & Heritage Network, University Archivist Jenny Clark turns the clock back nearly a century to when the University (or Technical College as it then was) spread its wings and attempted to branch into poultry & animal management… with some ‘fowl’ results!

The Loughborough History and Heritage Network is a collaborative project between Loughborough University and the local community aimed at fostering discussion about the history of Loughborough and the Charnwood Borough. The Network signposts historical events, local heritage organisations, and publications about Loughborough and Charnwood.

To find out more, visit their homepage here:

Loughborough University and Charnwood Museum are inviting members of the local community to attend their History and Heritage Community Day which is taking place in Burleigh Court later this month (Sunday 21st June).

The ‘Future of the Past’ event will include fascinating short talks from local authors and historians, a guided tour of the historical Loughborough University campus and also panel discussions.

Stands and displays from local history and heritage groups including Charnwood Roots, Kegworth Museum, Leicestershire Industrial History society and many more will also be present.

The event is free to attend and everyone is welcome, refreshment and bar meals will be on sale throughout the day. A full programme of events can be found on the Loughborough History & Heritage Network site here: 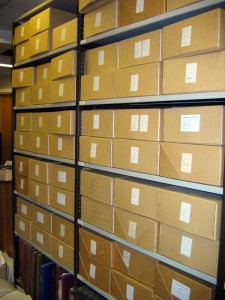 Our very own archivist Jenny Clark has delved deep into Loughborough’s past and written a couple of new articles for the Loughborough History & Heritage Network.

The Empire Bazaar & Christmas Fete 1922 explores the longstanding link between ‘town and gown’ in Loughborough and tells the story of the part townspeople played in establishing ‘the Grove’ as a hall of residence.

Radio Times at Lougborough continues a record of the Loughborough University Wireless Society, the groundbreaking telecommunications group formed by the Electrical Engineering Department back in 1920.

The Loughborough History & Heritage Network is a collaborative project between the University and the local community, funded by the Higher Education Innovation Fund and hosted by the Department of Politics, History and International Relations (PHIR) in collaboration with Charnwood Museum. It aims to signpost historical events, local heritage organisations, and publications about Loughborough and Charnwood. To find out more, visit the site below. 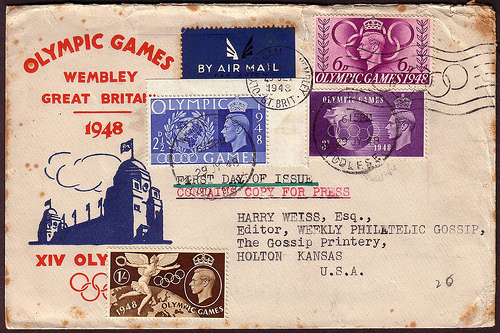 During July & August the Library’s print collection of University PhD theses will be digitised. This will mean that during these months some PhD theses will be unavailable while they are being digitised. We apologise for any inconvenience that this will cause but will try to ensure that titles are digitised as quickly as possible and then made available via the University’s Institutional Repository. 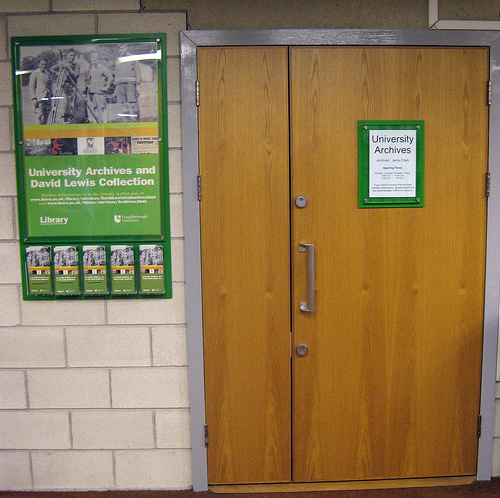 There’s a poetry showcase at the Martin Hall Theatre on campus this Thursday evening (24th May) which has drawn some of its inspiration from the contents of our very own archive.

The Department of English & Drama’s very own ‘Landscape Poet in Residence’, Mark Goodwin, will be leading a group of students who have collaborated on a series of poems based on the geography, history and aesthetics of the Loughborough Campus, helped by material held in the Library archives. For further details and ticket prices visit this site.

Continuing on an archive theme, our very own Archivist Jenny Clark has just written an article about one of British athletics’ most influential coaches, Michael Webster, who went on to become one of the guiding lights of the development of Loughborough University’s peerless sports department and facilities. To read the article, visit the Loughborough Sporting Club website here.

The London 2012 Olympics this summer is looming up on the inside lane fast – and the Olympic Torch is lighting every step of the way. And some of those steps are going to be taking it through campus!

It has just been announced this morning that on Tuesday July 3, 2012, the London 2012 Olympic Torch Relay will pass through the Loughborough University campus.

The Olympic Torch will arrive on campus through the East Entrance on Epinal Way just after 9am. It will then make its way through campus via the athletics track, past the Library and Burleigh Court and through to the Sir Denis Rooke building, evntually leaving via the West Entrance at around 10.30am.

Full details of the Torch’s nationwide route, including its journey on campus, are available at the London 2012 Organising Committee (LOCOG) website. Further information will also be available on the University’s 2012 website.

The Library has a vested interest, too – our archives contain a genuine Olympic Torch from the 1948 Games. Look out for details of a forthcoming exhibition which will be displaying this wonderful piece of sporting history. 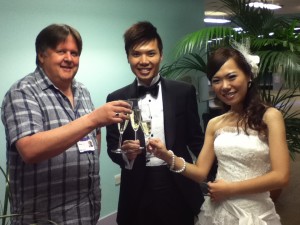 The Library hosted a happy event on Saturday 3rd September when two former students now working in Hong Kong had their wedding photos taken in the Library. Wing Kai Alfred Leung studied BSc (Hon) Accounting and Financial Management and graduated in 2005 and his wife Jamie completed her BSc in 2007 and her Masters in 2010 (both at Loughborough).

Alfred said that “as Loughborough is the place we met and knew each other, we would really like to have our wedding photos taken there”. The photo shows the happy couple and Dr Graham Walton (Head of Planning and Resources in the Library) enjoying a (non-alcoholic) celebratory drink.