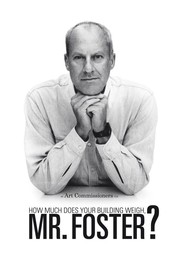 This Wednesday afternoon at 3pm in the Cope Auditorium Eden Flix presents a free showing of the documentary film How Much Does Your Building Weigh, Mr. Foster?, introduced by Professor Jacqui Glass, Professor of Architecture & Sustainable Construction in the School of Civil and Building Engineering.

The film traces the rise of one of the world’s premier architects, Norman Foster, and his unending quest to improve the quality of life through design.

Tickets are free, but booking is necessary – follow this link to do that.

Eden Flix are a series of highly acclaimed, thought-provoking and inspirational documentaries on issues related to engineering, design and social consciousness. All staff and students at Loughborough are welcome to attend.

The Eden Flix series of thought-provoking documentaries on an environmental theme begins again for the 2013-14 academic year with a screening of the Academy Award nominated 2010 film GasLand, introduced by Dr. Diganta Das, Senior Lecturer in Chemical Engineering, at 3pm on Wednesday, 20th November, at the Cope Auditorium.

With the concept of hydraulic fracturing, or fracking, becoming increasingly considered as a key source of fuel for the UK, strong opinions supporting and opposing the process are fervidly arising amongst scientists, corporations and environmental activists causing widespread confusion among the population. Concerns speculate that fracking could cause carcinogenic pollution to water and earth tremors and they also elaborate that the shale gas extracted is ultimately, not a long-term nor sustainable option. The reality is that sufficient evidence hasn’t yet been produced to make calculated decisions, despite the seemingly convincing cases made by both sides – exemplified by Josh Fox’s work in GasLand.

Dr. Diganta Das will introduce this screening and open the floor for discussion afterwards. The screening will commence at 3pm and is free for all students and staff to attend, although booking is required as space is limited. You can do this via this link.

Eden Flix presents a series of highly acclaimed, thought-provoking and inspirational documentaries on issues related to engineering, design and social consciousness, and is sponsored by the Centre for Engineering and Design Education as part of the Engineering and Design Educators Network series of events in collaboration with Loughborough’s long-established Flix Society. Watch out for details of further films next year. 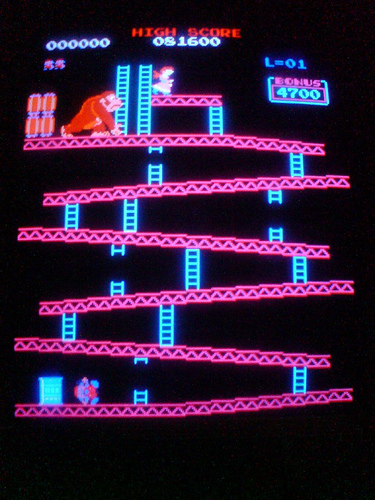 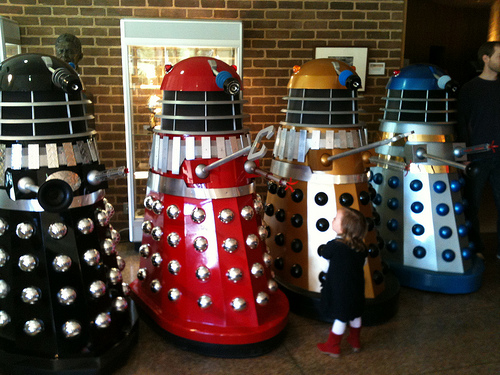 Then a jobbing staff designer at the BBC, Cusick was called upon in late 1963 to create the costume for a creature to be featured in the second ever story of the long-running science fiction serial, rather ironically substituting another budding young designer named Ridley Scott who had originally been detailed with the job but had to pull out after a scheduling conflict!

Working from a script by screenwriter Terry Nation, Cusick legendarily gained the inspiration for the classic pepper-pot design during a meeting in the BBC canteen – and the rest is history!

Somewhat infamously though, the terms of his BBC contract meant that Cusick never properly benefitted from the success of his design and the huge revenue it has gone on to generate, receiving only an ex-gratia payment of £100 (and a Gold Blue Peter badge!) from the corporation some years after. But his design has left quite a legacy, inspiring generations of watching children (and not a few adults!) to take cover behind the sofa at the sight of them and the sound of their grating war cry “Exterminate!”

Doctor Who itself celebrates its fiftieth anniversary this year and a fresh run of adventures starring the Time Lord’s latest incarnation, Matt Smith, begins showing on TV at Easter. But you needn’t wait that long for your Dalek fix – we have a wide variety of books about the history and appeal of the series in all its many formats, and a selection of classic 1970’s adventures starring Third Doctor Jon Pertwee among our DVD collection in the High Demand section. Dare you take to a trip to the Planet of the Daleks some time…? 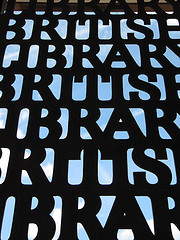 Highlights include a Fashion-themed LATE on 1 March, in partnership with the History of Fashion department at Central Saint Martins. Hear from Dylan Jones, (editor-in-chief of GQ Magazine) and fashion illustrator Tanya Ling and watch its exclusive ‘paper fashion show’ of specially commissioned designs by the Central Saint Martins Print Design students and leading designers such as Giles Deacon and Osman. Try out a new look in the styling area where you can get a make-over with Chantecaille, or for men, Pall Mall Barbers. Take part in live costume drawing and dance to music by iconic British DJs, Princess Julia and Jeffrey Hinton.  Lastly, there will be a pop-up exhibition showcasing a series of postcards from some of the most influential figures in the fashion world, including Gareth Pugh, Alex Fury and Adam Selman, telling us about their favourite item in the British Library.

To find out about all of the different events and book your place, go to: http://www.bl.uk/spring

Image by pshab used under a Creative Commons Licence. From: http://www.flickr.com/photos/pshab/5771179476/

The Campaign for Drawing has just launched a month-long celebration of its art, and is inviting people of all ages across the UK to participate.

The Big Draw’s stated aim is to raise the profile of drawing as a tool for thought, creativity, social and cultural engagement, seeing drawing not only in terms of its artistic merits, but as a useful basic human skill in every day life.

The University has a proud history of artistic endeavour thanks in no small part to the sterling work of the staff and students of the School of the Arts. Indeed they have their own research journal, TRACEY – Drawing and Visualising Research, which is devoted to the study of the drawing art form.

Don’t forget that we have masses of books on the subject as well, including books by and about famous artists within the medium, as well as books that can teach you all about how to draw. Among our many art databases, you may also find ARTBibliographies Modern a very useful resource too.

To find out more about The Big Draw, and how to take part, visit thier website here: 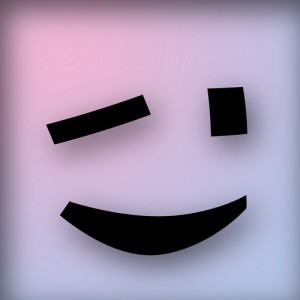 Thirty years ago today an email was sent containing a tiny image that would have profound effect on the style of human communication – the ‘Smiley’ emoticon.

Professor Scott Fahlman of the Carnegie Mellon University in Pittsburgh sent an email on September 19 1982 that included the first use of the sideways smiley face. Intended for use by the Professor as a means of differentiating between serious and humourous emails, the notion swiftly went ‘viral’ and spread across the globe to become one of the most widely used communication tools, undergoing many subtle (and not so subtle!) transformations along the way to suggest practically every form of human emotion in simple (and sometimes not so simple!!) graphic form.

We have a wide range of books examining the use and design of icons and symbols such as the emoticon among our art, design and typography books in the Library, as well as texts examining the language and sociology of semiotics and symbols.  Certainly plenty to 🙂 about!

Emoticon by Dominic Alves, reproduced under CC License from Flickr. 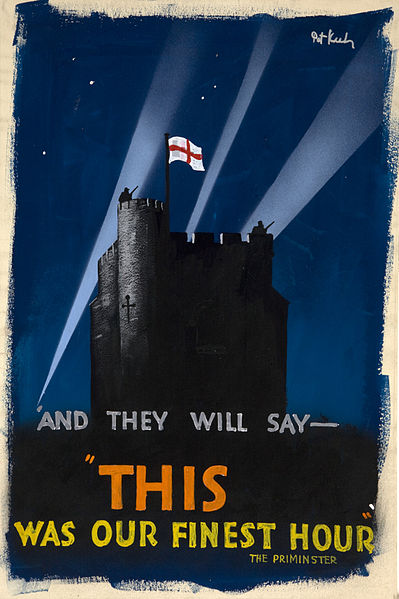 The National Archives struck a deal with Wikipedia this week enabling the online publication of hundreds of war-time propaganda artworks, including many previously unpublished and draft works.

Made possible by a digitisation grant from Wikimedia UK, the collection has been made freely available to the Public Domain on Wikimedia Commons. It includes posters, paintings, drawings, cartoons and portraits produced as propaganda for the Ministry of Information during World War 2, and should prove fascinating viewing for artists, designers and students of the history of the period. 350 pieces of work have been made available inititially but there are plans to digitise the entire collection of nearly 2,000 images.

The Library has a range of books about war time propaganda, its imagery and effect, plus you can find out a lot more about the subject through databases such as Art Full Text and Sociological Abstracts.

To view the collection, visit the Wikimedia Commons page here: 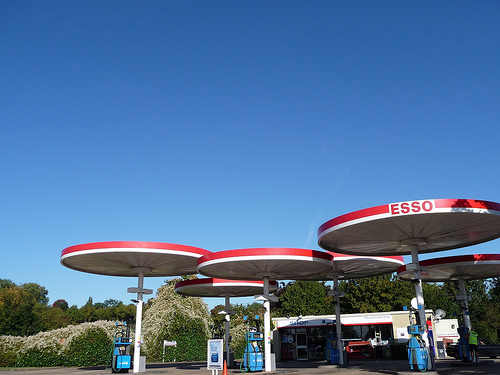 A local architectural landmark has just achieved a rare – and indeed unusual – distinction; it’s become the first petrol station to attain the status of a listed building from the English Heritage Society.

The Esso station on the A6 at Birstall in Leicestershire was selected primarily for its unusual mushroom-like forecourt canopies, built in the late 1960’s by an American designer. Although such canopies were once a common sight, these are the last in the country that are completely intact, and Heritage Minister John Penrose awarded the site a Grade 2 listing in recognition of a time “when road travel captured the public’s imagination and the motorway was full of futuristic glamour”.

If you’re interested in finding out more about the local history of the Leicestershire area, we have a wide range of reading matter on the subject. We also have many books on the subject of industrial architecture and historic buildings.

To find out more about English Heritage, and other listed locations in the local area, why not visit their website?

The Esso Station on the A6 at Birstall, image copyright Ned Trifle, reproduced under CC License from Flickr. 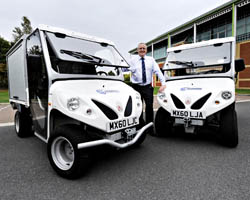 The University has taken a further big step in its quest to help the environment by lowering its road vehicle emissions by investing in two new electrically powered trucks.

These utility vehicles, which were jointly purchased by Facilities Management and imago Services can travel up to 50 miles on a single battery charge, and can carry 500kg and tow up to 2,000kg.

The vehicles will be used by the maintenance and imago Services teams across  campus. Typical jobs will include the collection of waste and recycling, and transporting goods and equipment to the many conferences and events on campus.

The vans, supplied by epower Trucks, use around 4p per mile in electricity – a saving of up to 80% compared to a diesel van. The simplicity of the electric motor means that maintenance requirements – and costs – are also a lot lower than on a diesel vehicle. Even when powered by National Grid electricity, the vehicle reduces CO2 emissions by up to 50%.

If you’re interested in learning more about this kind of technology, the Library has a growing collection of material about electric & hybrid vehicle engineering among our book and journal stock as well as the latest up-to-date information and research among the Aero-Auto engineering databases on Library Catalogue Plus.