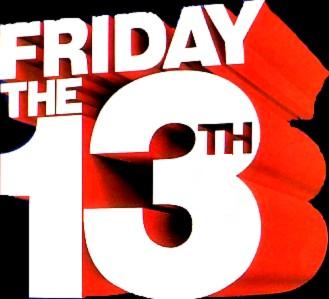 What does the date Friday the 13th conjour up in your mind? Ill omen and misfortune? Superstition? Or maniacs in hockey masks pursuing hapless teenagers (and I’m not just referring to the Loughborough Students Hockey team during Freshers Week).

Friday the 13th has long held an infamous quality in western society, even before the advent of that series of dreadful horror movies with the aforementioned maniac. Folklore is full of allusions to dreadful things happening on this day. Indeed, so rooted is it some people’s psyche that it has a profound effect on their day-to-day routine; people are known to avoid taking long trips on planes or trains in case some dreadful accident befalls the journey. Some even take the entire day off and spend it in bed so as to avoid any misfortune (which sounds like a good idea most days anyway).

This phobia of anything connected with the so-called ‘unlucky 13’ can be traced as far back as Norse mythology (the evil Norse god Loki apparently turned up at a shindig arranged by the other 12 gods and, true to form, embarked on massacring them like our friend with the hockey mask), and other instances such as Judas arriving as the 13th guest at the Last Supper, and of course astronaut Tom Hanks having all those problems with that rocket in Apollo 13.

Of course, we in the Pilkington Library have no such truck with such base superstitions, proudly belonging, as we do, to the cutting edge of 21st century technology, with which absolutely nothing can ever go even remotely wronggGGGGGGGHJKFDRERLXxxxxUIOOOP.