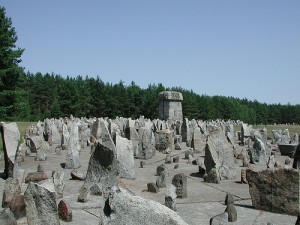 Today (January 27th) is Holocaust Memorial Day, and coincides with a recent BBC radio programme which recounts a geophysical examination of the Treblinka death camp site by a team of British forensic archaeologists.

Over 800,000 Jews were murdered on the site between 1942 to 1943 before the Nazis destroyed the camp in a vain attempt to erase all evidence of their crimes. But unlike Auschwitz, where its gas chambers and crematoria have survived, the memorial at Treblinka simply consists of 17,000 stones with the names of places where Jews were transported from all around Europe. A team  from the University of Birmingham have used the latest imaging techniques to help locate the remains of victims at the site of the camp and to throughly map its location.

The Hidden Graves of the Holocaust is currently available to listen to again via the BBCi Player here. For further reading on the topic, the Library has a large stock of material devoted to the history, study and discussion of the Holocaust, searchable through Library Catalogue Plus.

The stated objective of Holocaust Memorial Day is to “provide an opportunity for everyone to learn lessons from the Holocaust, Nazi persecution and subsequent genocides and apply them to the present day to create a safer, better future”. To find out more about it, visit the HMD Trust home page here.