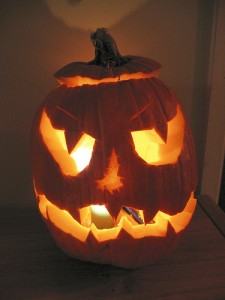 Halloween Pumpkin by Tasitch, reproduced under CC License from Flickr

It’s that time of year again, for ghosties and ghoulies and long-leggedy beasties and things that go bump in the night… also for dressing up, eating lots of sweets and watching horrible old movies on TV!

Halloween is generally considered to be an American tradition (not least the bit about dressing up and eating sweets!) marked by an annual holiday in the States on the 31st October, though its origins stem from the venerable Catholic festival of All Saints Day, or Hallowmas, which is celebrated by Catholics  throughout the world (albeit in a rather more sober fashion!).
Indeed, the eponymous Jack-O’-Lantern carved out of pumpkins actually stems from the ancient custom of carving turnips into lanterns as a way of remembering the souls held in purgatory!
Contemporary culture has welded Halloween with the horror & supernatural genre of literature, cinema and television, and many famous characters of page and screen – such as Dracula and Frankenstein’s monster – have become as much indelible icons of the Halloween season as the ubiquitous pumpkin.
The Library is well stocked with suitably ghoulish material for the occasion; we have a wide range of horror fiction from the literary classics of Mary Shelley’s Frankenstein and Bram Stoker’s Dracula, to the shorter supernatural works of M.R. James and H.P. Lovecraft, up to the more contemporary novels of Stephen King, as well as a wealth of critical and cultural studies of the genre in print, on stage and on screen, all easily searchable via Library Catalogue Plus.
If it’s movies you’re after, we also stock a variety of horror films on DVD in our High Demand section, including the classics Night of the Living Dead, Aliens and The Shining. We are obliged to point out that we are in no way responsible for any nightmares you may suffer afterwards…!