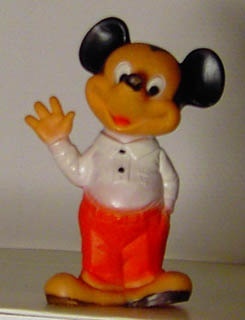 One of the most iconic characters of modern times celebrates their 90th birthday this very day – the one and only Mickey Mouse!

Created by Walt Disney and Ub Iwerks in 1928 for Steamboat Willie, one of the Disney Studios’ earliest sound animations, the character has gone on to appear in over 130 films and countless spin-offs in every conceivable medium – and became the figurehead of the Disney phenomenon. Walt Disney himself acknowledged the debt his studio owed to the lovable cartoon rodent – “it was all started by a mouse”, he declared in an interview in 1954!

We have a wide range of books about Walt Disney, his films and Mickey Mouse among our art and cinema books on Level 2.

You can also explore more about the history and influence of Disney (and Mickey!) at the British Film Institute website and our online art databases including Art Retrospective and Art & Architecture Source.