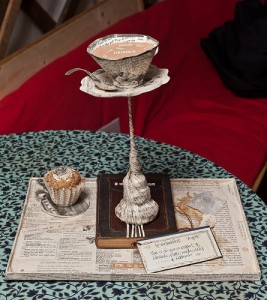 Libraries and exhibitions in Edinburgh have been attracting a spate of mysterious visitations… striking paper sculptures from an anonymous artist!

So far seven sculptures have been ‘donated’ to Edinburgh-based arts groups. The first was found in March at the Scottish Poetry Library. Then the National Library of Scotland staff discovered a delicately crafted gramophone in June. Later in the month the city’s Filmhouse found a tiny cinema made of books. In July staff at the Scottish Storytelling Centre found a paper dragon’s egg hatching on a windowsill, and last month two more were discovered at the Edinburgh Book Festival and one more at the Central Lending Library.

No-one knows who, or indeed why, these sculptures are being left, other than that the artist is obviously a fan of libraries – even if they’re not a fan of the books they’ve cut up to create their work!

There’s a blog site that’s been set up following these ‘arrivals’ as they appear, which has already attracted the attention of the national press. Why not keep tabs with it as the mystery unfolds…?