University home > Services > Library > ad-lib > The Stuff that Dreams (and Bank Balances!) are Made of… 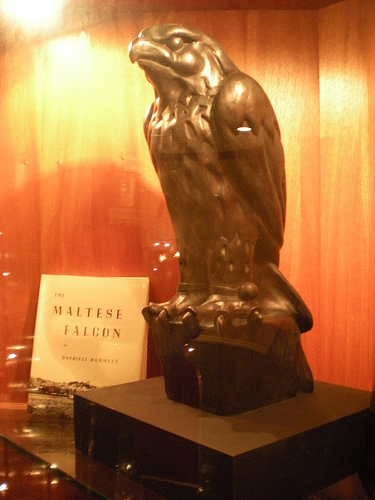 A statuette of one of cinema’s most iconic – and infamous – props, the Maltese Falcon, was yesterday sold at auction in New York for a staggering $4+ million.

The lead-cast statuette was one of two made for and featured in John Huston’s legendary 1941 film noir The Maltese Falcon, starring Humphrey Bogart as Dashiell Hammett’s sardonic private eye Sam Spade.

Ironically during the course of the film, the Falcon changes hands for as little as $10,000 – but many of the people who come in contact with it ended up murdered into the bargain!

If you want to see this ‘rare bird’ in its original form, you don’t have to pay anything but a trip to our High Demand section, where we keep a copy of The Maltese Falcon on DVD. We also have a copy of Dashiell Hammett’s original story among our American fiction section on Level 2, as well as a wide range of books examining the film noir genre and its influence on modern cinema.