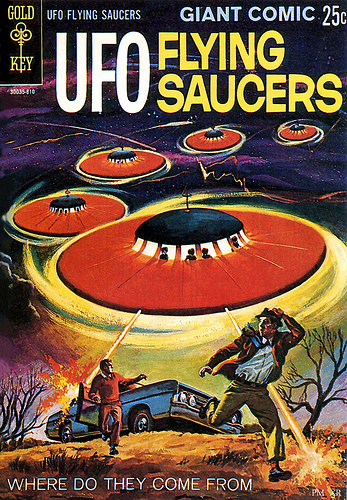 Google’s latest doodle celebrates the 66th anniversary of an event beloved of conspiracy theorists and science fiction writers the world over – the infamous Roswell UFO crash.

The event took place during the evening of July 7th 1947 when a mysterious aircraft crashed in farmland near the sleepy New Mexico town of Roswell. Rumours that this vessel was not of an Earthly origin were ignited by a hasty press release issued from a local airbase, but the US military subsequently moved quickly to quash this story and claim the vehicle was nothing more than top secret surveillance balloon and not visitors from another planet.

Yet the rumours would persist over the decades, culminating in the ‘discovery’ in 1995 of alleged military footage taken shortly after the crash purporting to show an autopsy of one of the dead alien pilots (but subsequently revealed to have been a hoax in 2006).

The Roswell Incident has had a substantial influence not just on the science fiction genre – most notably the popular TV series The X-Files (1993-2002) – but on American and world culture in general, with ‘Roswell’ becoming something of a by-word for government and military cover-ups the world over.

Budding Mulder & Scully’s on campus may find our own extraterrestrial resources limited to the SF/fantasy novels among our Leisure Reading collection, but those with a more scientific interest in space will find plenty of stars to gaze at among our science and engineering databases, including RealClimate, the National Aerospace Laboratory, and a range of NASA resources including their Scientific & Technical Information Site.

And of course, if during the current refurbishment of the Library our builders stumble across anything extraterrestrial in the basement, we’ll be the first to let you know… honest!