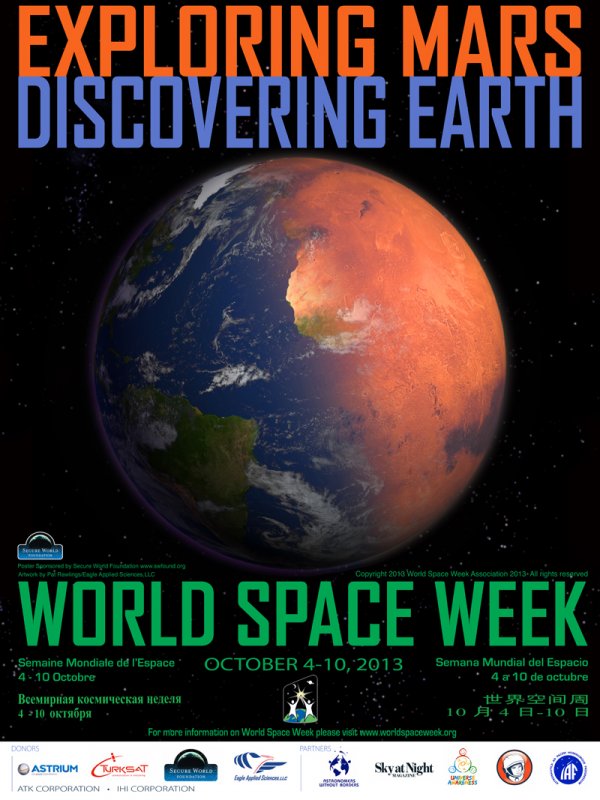 The theme of this year’s annual World Space Week is a world that has long fascinated and inspired scientists and artists alike of every description, the Red Planet Mars.

Over the next week there will be a global celebration of mankind’s exploration of Mars, and how by studying our diminutive but intriguing red neighbour we learn more about our own planet. Indeed, the highlight of the week, a world-wide simulation of a manned landing and survey of Mars, will seek to define how to create a world to live in from scratch with only limited natural resources to work from.

Launched specifically on this date by the UN General Assembly to mark the succesful launch of Sputnik 1, the first man-made satellite, on October 4th 1957, and the signining of the ‘Treaty on Principles Governing the Activites of States in the Exploration and Peaceful Uses of Outer Space, including the Moon and Other Celestial Bodies’ on October 10 1967, World Space Week has been held every year since 1999, and seeks primarily to educate people about the positives of space exploration and encourage better public understanding and support for space programmes.

The Library has quite a range of material about space exploration among our aeronautical engineering section, including several books on the topic of the Red Planet – H.G. Wells seminal alien invasion adventure War of the Worlds among them! We also have access to NASA’s Scientific & Technical Information (STI) web site among our extensive array of Aeronautical databases.

To find out more about World Space Week and the activities that are happening, visit their website here.