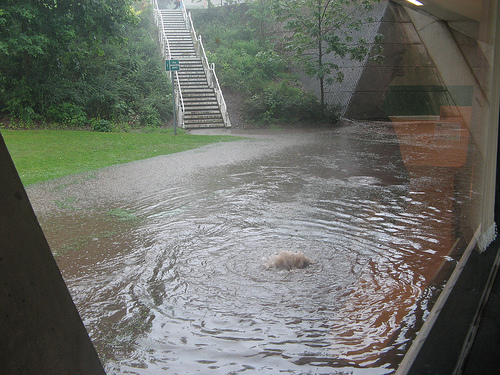 Jokes about wet English summers have been a staple for self-depreciating British residents since the age of the Caesars, but it was no laughing matter for those caught in the shock deluge that water-logged Loughborough (and the rest of the country) during Open Day a week or so ago.

Indeed, so severe was the rain that the Library even had its own moat (pictured above) and flooded the fire escape exit down on Level 1 (fortunately for users and our stock, only up to the level of the first step!!). Other buildings across campus were similarly effected, too.

While there doesn’t appear to be very much one can individually do in the face of such a watery onslaught (apart from investing in a bigger umbrella!) research is on-going into how society can better cope with climate change and the unpreditable weather it brings down upon us. The University’s own Centre for Hydrological and Ecosystem Science (CHES) in the Geography Department is one such facility, plus we ourselves have access to a wide variety of up-to-date information on the topic via databases such as RealClimate and Water Resource Abstracts. Something to look at while you’re waiting for the skies to clear, anyway!

For further pictures of the Great Library Flood of 2012, check out our Flickr photostream here.