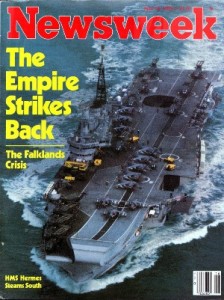 Today marks the 30th anniversary of the beginning of the Falklands War, a conflict that was to claim the lives of 255 British servicemen and 650 Argentinian troops.

The invasion was successfully launched by Argentina’s then-ruling military Junta under the direction of General Leopoldo Galtieri during the early hours of April 2nd 1982, but Great Britain replied with a Task Force that defeated the invaders over the course of a series of bitter sea, air and land battles  nearly two and a half months later in June.

The conflict stems from a long-running clash over sovereignity rights. Britain colonised the Islands in 1833 but the Argentinians believe they inherited ownership after their formative years as a Spanish colony. Tensions remain high between the two countries over the issue, particularly in recent months after Argentina’s opportunistic President Cristina Fernandez de Kirchner embarked on a rancorous course of trade embargos and diplomatic sabre-rattling, while the British government remain committed to defending the Falkland Islanders’ right to self-determination.

The Library owns a multitude of books detailing the conflict and the issues surrounding it, and you can read all about the historical day-to-day progress of the campaign among our electronic newspaper archives on Library Catalogue Plus.