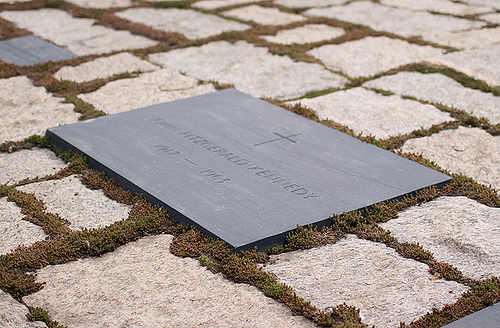 Fifty years ago today one of the most shocking incidents in 20th century history occurred in Dallas, Texas, when the then United States President John F. Kennedy was assassinated by a sniper’s bullet while travelling in a motorcade on a visit to the city.

President Kennedy was into only the third year of office since his election in January 1961, but his reign had already been marked by many remarkable events, most notably the notorious ‘Bay of Pigs’ US-sponsored invasion of Fidel Castro’s Cuba in 1961 and the subsequent Cuban Missile Crisis in 1962 which took the world to the brink of an atomic war.

Lee Harvey Oswald, a former US marine who had defected to the Soviet Union, was charged with the assassination, but he himself was shot and killed by an over-wrought night-club owner, Jack Ruby, while being transported to jail. Subsequently, many conspiracy theories have sprung up regarding the precise details and nature of Kennedy’s murder, although officially Oswald has been held as being solely responsible.

At the time the entire world was stunned by the President’s murder, and to this day Kennedy is revered as one of America’s finest Presidents.

We have many books on the subject of President Kennedy and his era among our history collection on Level 2. You can also get a complete record of how the papers reported that fateful day by browsing among our electronic newspaper archives among our databases on Library Catalogue Plus.