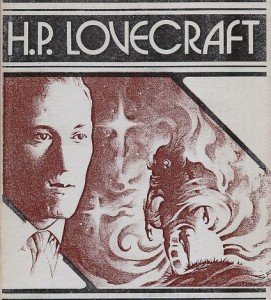 75 years ago this March marked the passing of one the legendary figures of contemporary science fiction-horror fiction: H.P. Lovecraft.

Born on Rhode Island in 1890, Lovecraft’s work, centred around a bizarrely horrible mythology of ancient diabolical beings headed by an octopus-like entity called Cthulu, went more or less unrecognised by critics during his life, but which proved the inspiration to a gamut of post-war genre writers including Robert Bloch, Stephen King and Alan Moore.

The Library possesses several copies of Lovecraft’s stories and that of some of his imitators, as well as a wide variety of horror stories by authors from around the world, searchable via Library Catalogue Plus.