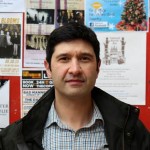 15 places are available for Loughborough University London students to attend a guest lecture by Aysar Ghassan on Tuesday 23rd Feburary.

Aysar Ghassan’s role as a Senior Lecturer in Automotive Design at Coventry University is underpinned by his research and his experience as a vehicle designer. Aysar’s research into peer tutoring and professional identity formation reflects the need to broaden the design curriculum. He has also published insights on branding of consumer goods and has contributed to developing a contextual understanding of user experience research and design for sustainability. In his ongoing PhD programme, Aysar is analysing discourse related to Design Thinking. In addition Aysar writes design-focused journalistic articles (most recently for Artsthread.com) aimed at disseminating research to a broader audience.

In 2004, Mars’ ‘Kingsize Chocolate Bar’ came to be viewed as a culturally constructed cause of obesity in the UK. To resolve this crisis, Mars reacted by redesigning its large bar. In this talk, cultural theory developed by the anthropologist Victor Turner provides a lens through which to view Mars’ design strategy. Turner argues that when protagonists transit from a ‘state’ of being to a contrasting state, this movement occurs through culturally prescribed means. Aysar argues that Mars’ design strategy helped move its large bar from being associated with the undesirable state of ‘danger’ to the desirable state of ‘safety’ and that this transition facilitated the continued survival of the redesigned product. Accordingly, Asyar frames Mars’ designers as mediating the transition between Turnerian states. Beyond discussion on chocolate, Turner’s cultural theory may be used to construct a model to inform design strategy in a wider sense. He argue this model may create contradictions between commercial and ethical imperatives and suggest that associated ethical dilemmas must be explored in design education.