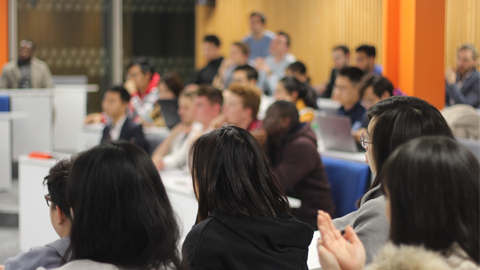 In this blog, Hakeem Omolewa, an MSc Security, Peace-building and Diplomacy student, depicts his recent experience hearing from Tahir Aziz (Director of the South Asia Programme at Conciliation Resources) as part of as part of a session entitled NGO Involvement in Peace-building: The Case of Kashmir.

Last month, students taking the Peace-building module as part of the MSc Security, Peace-building and Diplomacy programme and other Institute for Diplomacy and International Governance programmes, had the honour to be visited by Tahir Aziz, someone who embodies a large part of what our course is about. Tahir Aziz is the Director of the South Asia Programme of Conciliation Resources and oversees the Jammu and Kashmir programme with the aim of facilitating greater participation on both sides of the Line of Control (LoC) in peace processes. It is through the lens of Conciliation Resources efforts in the Jammu/Kashmir conflict that that our class explored NGO involvement in peace-building and came to understand and acknowledge the vast nexus of issues that practitioners face.

The situation in Jammu and Kashmir is a case of protracted conflict characterised by prolonged and often violent confrontation that has divided communities and left them struggling for fair access to institutions, political and economic participation, and the opportunity to live in unity.

The discord surrounding the Himalayan region predated India’s and Pakistan’s independence from Britain in 1947. A partition plan gave Kashmir the executive decision to accede either to India or Pakistan; the then Maharaja responded with independence at first before deciding to cede the land to India shortly after. Three wars followed prior to both countries declaring themselves as nuclear powers, thus making the matter much more perilous. Both countries claim Kashmir as a whole, however internationally the territories are recognised as India-administered Kashmir and Pakistan-administered Kashmir divided along the LoC.

Tahir presented the vision of Conciliation Resources centred around the Accompaniment Model. This places a greater emphasis on local agency in Jammu and Kashmir, giving the conflict stakeholders a primary role. Conciliation Resources through its work and approach has highlighted tensions with traditional peace-building that have necessitated a new approach.

One example in practice was shown in the film “Trading for Peace”. The film detailed how allowing local trade across the LoC would provide tangible economic benefits for all parties involved but also serve as a confidence-building and re-conciliatory measure. It also addressed the more pressing issues of protracted conflict. Connecting people and building relationships across cultural and physical divides had positive impact on lives of those living near the Line of Control and on the inclusion of typically excluded communities into the broader peace process. This method of actively working with local partner organisations and people to build trust amongst conflicting communities is a move away from traditional models of “peace-building”, centred on achieving an absence of violence through providing pre-defined top-down models of political institutions and economy.

Through the Conciliation Resources approach, we were able to see how a positive peace may be aimed at through bottom-up/grassroots processes giving agency to the local. Recent disruptions of the formal peace process between Indian and Pakistani governments have provided further challenges for the people of Kashmir and those who have an interest in peace in the community. The revocation of Article 370 by the Indian government removed India-administered Kashmir’s special status in the country. This gave New Delhi more jurisdiction, increased media controls, and resulted in the arrest of political figures in Kashmir amongst other changes that exacerbate structural violence.

The philosophy of Conciliation Resources is that peace-building is more than a series of changes imposed from the outside as a ‘fix’. Rather, it is a long-term effort involving all stakeholders to engage and develop relationships that help to transform situations from violent to non-violent conflict. In Tahir’s work, there is an acknowledgement of the fact that conflict may resurface and thus the focus is on transformation. I was able to see this in the way attempts are being made to develop a shared view and repair relations. The film “A Journey through the River Vitasta” was made by journalists from both sides of the LoC divide as part of the project Dialogue through Film and Media. This demonstrated how understanding the views of counterparts on the other side of the LoC was critical in the peace-processes. The LoC divide ripped apart families and caused a heightened level of mistrust, however this project facilitated building and maintaining ties, and increasing empathy.

The work conducted by Tahir and Conciliation Resources touched upon many of the concepts, ideas and themes that I covered on the MSc Security, Peace-building and Diplomacy course this semester. Particularly in relation to the evolution of peace-building, transition from efforts modelled and implemented by major intergovernmental organisations to work with local/grassroots business and individuals, and also the move to NGO and local engagement instead of the UN-led management of peace-building. I was also able to see in real life how the goals of peace-building have broadened from mainly security of state to encompass human rights and community development.

I had the sense that every student in the room all programmes benefited greatly from having Tahir at this session. With him, I was able to gain a deeper insight into the complexities of the issues in building peace that we explored academically throughout the semester on this module and, it was inspiring to meet an individual who is actively pursuing peace in our conflicted world and believes that there is hope.

Read more on the session NGO Involvement in Peace-building: The Case of Kashmir here.

To find out more about our MSc in Security, Peace-building and Diplomacy and about other Institute for Diplomacy and International Governance programmes, please visit our website.