November marked three months since I took on my role as a Global Student Ambassador for Loughborough University London, which started with my first official trip to India to represent the University and share my experiences of studying and working for them. 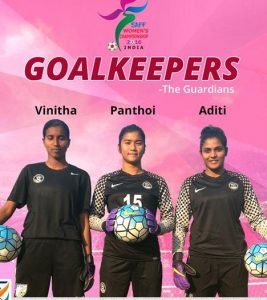 As my colleague and I were in the last leg of our trip, I was informed that I had been called up to be the goalkeeper for the Indian National team for the 4th edition of the South Asian Football Federation Cup. I was delighted to have been offered this opportunity and immediately contacted my manager at Loughborough to share the news.

Loughborough University have always been very supportive of my passion for football and they immediately agreed that I should pursue this opportunity in India. 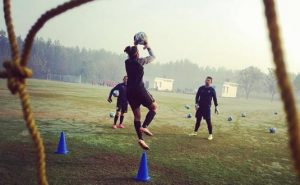 As I was playing for West Ham United Ladies Football Club every week back in London, I was both mentally and physically ready to put in the hard work at the preparatory camp in order to be ready for the last big tournament of 2016.

One of the main highlights from this camp was when the head coach, goalkeeper coach and the sports scientist for the Indian Men’s National team became part of the training team for a couple of days. It was a great experience for the team as it was the first time that we trained under foreign coaches.

The whole team felt ready and pumped as we approached the tournament date. 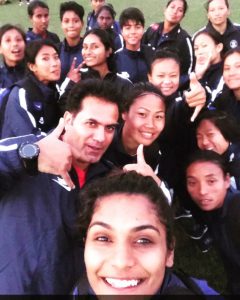 We won our first game against Afghanistan 5-1, though I was gutted to have conceded that one goal as starting the tournament with a win with a clear win would have been ideal for me.

The second game was against Bangladesh which ended in a goalless draw. We were all disappointed with that result as we dominated the game throughout and had a lot of chances to score but just couldn’t manage to put one in the back of the net. It also meant that we finished 2nd in our group and had to play against Nepal, our arch rivals, in the semi-finals. Nepal had always been finalists in the previous 3 editions of the competition and thus it was a very important game for us. We knew that it would be a big challenge so we prepared for it like it was the finals. 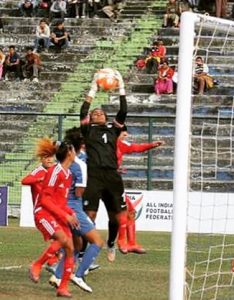 The team showed real character and belief in that match and I was really happy with my performance. I made few good saves to keep us in the game but conceded one goal from the penalty spot.

We were exhilarated and very confident going into the final against Bangladesh as we had already seen how they played and we knew we could beat them. We just had to believe in ourselves and trust each other to deliver what the whole country was expecting from us.

To be honest, I was a bit nervous firstly because it was the final match, but also because I was feeling ill. I had come down with a very bad cold but I knew it was important for me to be part of this game and help the team win the cup again.

We started the game really well, dominated the ball possession and scored in the 12th minute before they equalised in the 40th minute. In the changing room at half time, we all were very positive and everyone had a hunger to win the cup. Everyone kept encouraging each other, with a few of the senior players in the team, including myself, motivating each other, and guiding and encouraging the younger players. In the 2nd half, our wing backs and wingers put in a lot of crosses, winning the ball in the attacking half and in the end we got the result that we were looking for; we won 3-1! 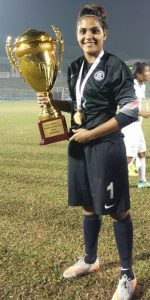 It is every athlete’s dream to represent their country and I feel extremely fortunate to have been doing that for the past 8 years but I still goose bumps every time when we sing the national anthem before the match.

This tournament helped me get a wonderful start to the New Year and hope this year has lots of more exciting things in store, as I resume my role as Global Ambassador for Loughborough.

Why I choose to study Disability, Design and Innovation MSc