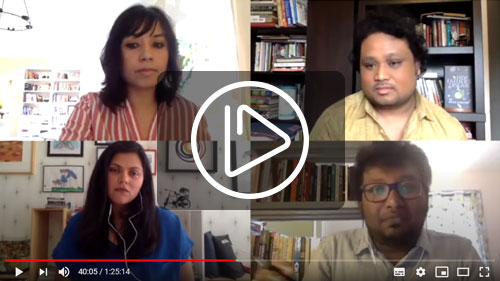 India is not only home to the world’s largest film industry but also has one of the oldest media ecosystems today, with a prolific output in television, radio, print and digital media. The panellists discussed how these systems not only shape hearts and minds in the large nation but also have significant impact in the region, as well as in the world. The panellists further asserted that several Indian film stars have come out in support of the Black Lives Matter movement, there is an urgent need to self evaluate the complicity of the culture industry in perpetuating and normalising anti blackness- whether through fairness products, cinematic narratives or the fashion industry.

Dr Ghosh began the panel with some shocking facts and figures: “The fairness cream industry in India is estimated at 450$ million and that data is only from 2016. But this goes beyond the fairness creams. India has the world’s largest film industry and Indian films have always carried a dominant cultural signifier for India as a nation.”

Dr Dasgupta, speaking about normalising racism in the Indian culture industry, said: “There is this hypocrisy that is prevalent in the Indian community, kind of in our attempt to appropriate whiteness. And this is very similar to what we’re seeing with all these countless Bollywood stars who have been speaking up for Black Lives Matter and taking the knee. And you know, my question is- where were they when it comes to Indian lives within India who continue facing persecution?”

Dr Shringarpure discussed diasporic productions like the Mindy Kaling Show, Never have I Ever and Aziz Ansari’s Master of None. She said: “In these shows, you get a lot of depiction and visibility of darker subjects, queer subjects, but within the safety net of a narrow American narrative. So it’s the same jokes, the same plots, but reproduced with darker-skinned actors. And then, within that, there’s also a kind of humiliation or subjugation of one’s own heritage with jokes about accents, jokes about your parents and how backward the previous generation was, how troubled my childhood was because my parents were just not hip or cool.”

Finally Aruni Kashyap discussed issues of racism and exoticisation faced by those of North East origin in India. He said: “Most Indians don’t think that people from Northeast are actually equal people and it translates in laws such as which exist still in a lot of states. We are barbaric and we fight contextless wars, we are xenophobic, these are the terms that people in Northeast are often described by. At the same time, the Northeastern subject is also considered a sexy, you know, promiscuous, attractive, something to possess.”

The panel was watched by over 3500 viewers and can now be viewed on Youtube.

The panellists are now writing a book based on the discussions started in the panel which will be published next year as Imagining Imperial Formations: India’s Culture Industries.

To find out more about Dr Rohit K Dasgupta and our Institute for Media and Creative Industries, please visit our website.