Phil’s Journey from Loughborough to London

After graduating from BSc Sport, Health and Exercise Science at Loughborough University, I had an incredible year working as VP Action for the LSU. I oversaw all of the voluntary opportunities students could get involved with during their time at Loughborough, and managed to set up a few new projects too. I found out about Loughborough’s plans to move to London whilst working for the LSU, and whilst I liked the idea of a change of scenery for my master’s, but was unsure whether the Loughborough spirit that I knew so well would be present in London. 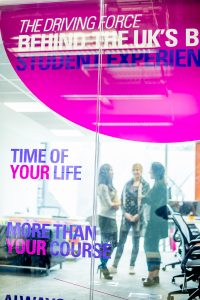 I spent the summer of last year deciding what I wanted to do, and after coming to the end of my role as VP Action, I decided to join Loughborough University London for the opening year. I entered the building to enrol on day one and was immediately taken back by the atmosphere. There is a clear sense of Loughborough community on the campus, but it definitely feels like a step on from my experience at undergraduate level. Because the campus has been established for master’s study and research, all of the learning spaces and support networks have been purposefully designed for postgraduates.

A key part of our learning is achieved through an initiative called Enterprise Through the Curriculum, which is geared towards maximising your potential over the course of your master’s, so that you can graduate with the best possible chance of making the next step of your career journey. Over the past year, I have taken part in mock recruitment tests, completed a live project with a London business, gone on site visits to places like Google and Royal Military Academy Sandhurst and received lectures which have been led by influential professionals in the sports industry.

When I’m not busy studying or working on my professional development, I tend to spend my time getting involved in the LSU on campus, or catching up with friends on the Olympic Park. Next door to the campus is BT Sport, which is always offering students free tickets to watch live shows such as Match Day Live and Rugby Tonight. Around the corner from the campus is a row of new restaurants and pop up shops called Canalside, which is the perfect place for a drink and some food in the sun. I live at Unite Stratford One, 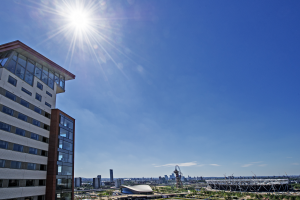 so being next door to Westfield Stratford Shopping Centre and Stratford’s train, underground and bus links means I’m rarely stuck for things to do. From my room, I can reach the bars, restaurants and shops in central London, Soho and Oxford Street in less than 10 minutes on the underground.

I have really enjoyed the past year living and studying in London. I think it’s an experience everyone should try, 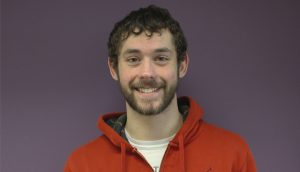 especially as a postgraduate student. If you would like to ask me anything about my time at Loughborough University London, please get in touch.