So I have finally arrived in London; the city of countless opportunities, creative spirits, cultural diversity, new trends, high competition and great motivation. Monday 21st of September 2015 was my first day on campus and my first day back into education. Walking to the campus, I caught a glimpse of the many iconic Olympic Park venues and thought, “this is my home for the next year”.

“Welcome to Loughborough University in London” said a smiley peer mentor as I walked into the campus reception. She pointed to a man joking with a group of students: “Do you know who that there is?” asked the Peer Mentor. “That’s Loughborough University’s Vice-chancellor, Professor Robert Allison. Everybody likes to take selfies with him!”.  Really..? Selfies with the VC..? 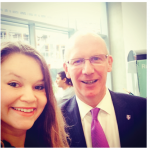 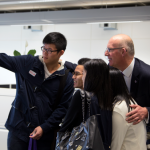 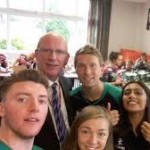 After a full day of registration, we were guided through 10 jam-packed introduction days. I was introduced to the curriculum and met the professors from my institute, I attended mock recruitment sessions, met the team of dedicated support staff, I had a chat with Ellie Read (LSU coordinator for London) and of course met lots of students who are also starting at Loughborough University London. I also managed to invent a new Decathlon game (and won!), but the highlight of the ten days has to be holding the monumental London 2012 Olympic torch.

Overall, the atmosphere on campus is extremely positive and engaging. Despite studying my course for just a matter of days, Ellie from LSU London has managed to encourage me to sign up for something that I would have never done before – abseiling down the 114-meter-tall ArcelorMittel Orbit. The abseil was arranged to raise money  for St Mungo’s Broadway, and was Loughborough University London’s historic first fundraiser! 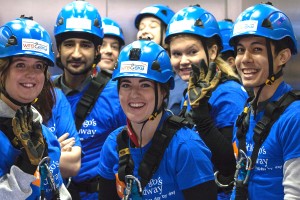 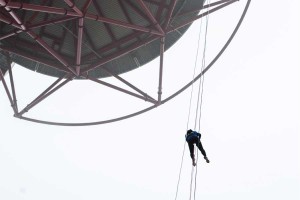