Technology and its role in racialised surveillance 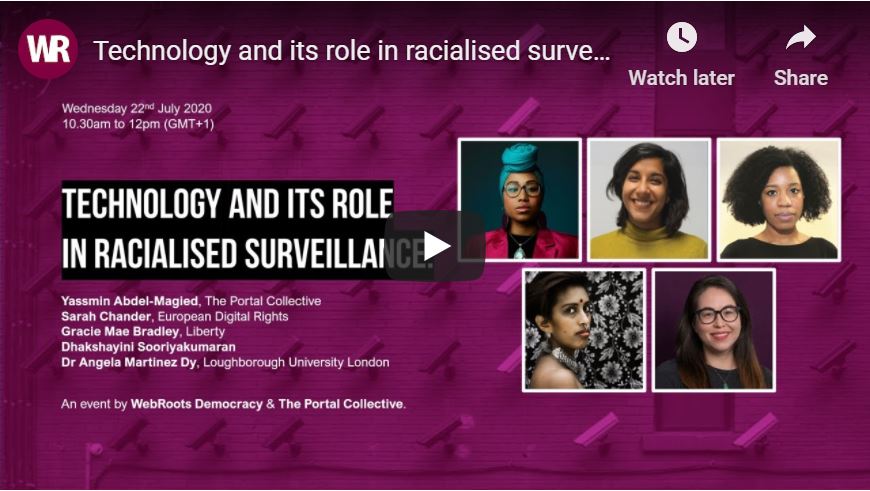 Dr Angela Martinez Dy, Senior Lecturer in Entrepreneurship for the Institute for Innovation and Entrepreneurship recently participated in a virtual panel discussing technology and its role in racialised surveillance.

Technology and surveillance have been around for a while, however, we are constantly faced with new developments and wider uses being made available. Automated facial recognition, contact tracing apps, and digital identity initiatives are on the rise. Taking examples from the UK, EU, and Australia, the virtual panel event with WebRoots Democracy and The Portal Collective explored the implications of these new technologies for migrants and people of colour. In particular, the event looked at the ways in which these technologies risk perpetuating racist outcomes in society.

About the virtual panel

Dhakshayini was tasked with giving an overview of the history of surveillance. She explained that data collection was a tool used by colonial powers to inform their rule. For example in India, colonial Britain conducted a mass census which gave details around the caste system which was utilised by the colonial power to promote/create division among the population thereby making it easier to control. Such surveillance was often driven by “scientific” racism and therefore furthered notions around white supremacy.

Gracie discussed “policing by machine” with predictive policing systems.  This however, results in racialised, self- fulfilling policing, as rather than data about where crime occurs, it highlights the areas that police are going, thus creating patterns of discrimination backed up by technology. The Durham police force used technology to determine if someone should go to court for an offence or receive a warning etc. In this case, an individual’s liberty can be determined by a corporate machine using crude stereotypes. These stereotypes were also centred on class, gender, sexuality and disability.

Some see data collection as an act of violence with Dr Angela Dy providing a concrete example of this in the US. She cited a group called “Mi Gente” whose slogan is “No tech for ICE”. They have identified links between corporate players such as Thompson Reuters and immigration enforcement in America. Lots of seemingly innocuous data is collected, analysed and used to make profiles of undocumented people, which is then passed on to ICE agents to make raids.

Gracie commented that in the UK this is quite rudimentary. In the UK data is collected around children in schools, including those who have English as a second language. Schools share information with the government and such information can be used for immigration enforcement. Sarah added that this type of control is also used in Europe, where biometric data on non-European migrants is used, making certain groups exceptional in terms of human and civil rights.

The US context was further explored by Dr Angela Dy who cited a long history of “racialised surveillance of activism” with particular emphasis on black and indigenous activists, which, she states, is a live situation. In the 1950s/60s, cold war tactics were used to destabilise political movements by people of colour. This included assassination, for example the murder of activist Fred Hampton in 1969 by police. With regards to the collection of data around the covid-19 crisis, Dr Dy highlighted concern that the government is the customer rather than the regulator. With such a climate of fear around the virus people are willingly providing their data and information without regard to the possible ideological use of such data by data companies. She preceded to argue that data could be used to support and direct resources to those people in need rather than being used in a punitive way with law enforcement and immigration.

Sarah argued that data collected by transnational corporations is used in the criminalisation of certain groups as the profiling of marginal populations can be used to discriminate. She stated that data can be used to discuss racial and social justice, to redirect resources to those who need it, however, there is a big argument for the abolition of big data.

Gracie added that politics came before technology and that technology is used in a political way. She advocated the need to disrupt the “logic” of technologies, whereby it is seen as neutral collection of everyday/minor data.

Sarah mentioned “Digital Rights” – an organisation which advocates the abolition of big data arguing that it will always be used negatively. Dhakshayini agreed with the “defund the police movement” arguing that the money could be used to fund other things such as health and education.

The final part of the panel focused on questions and answers and positive action. For example, how can students resist attendance technologies used to make decisions for their visas? Dr Angela Dy suggested that this is an opportune moment for student activists to pressure universities to de-link from being part of state control. Sarah proposed unionisation for those working in the tech industry, not just around harmful tech but harmful employment practices.

Gracie mentioned Against Borders for Children, who argue that schools should not collect data that can be used by immigration enforcement. Her argument: “why not give resources for everyone” rather than targeting a particular group? Dhakshayini stated that in Australia, using predicative policing, children as young as 10 years old are stopped and searched. That data could be used to reduce race pay gaps and non-disclosure agreements.

Dr Angela Dy finished by talking about building an anti-racist classroom, bringing together all universities, to discuss all university stakeholders and what universities can do. One example being the “Justice for Cleaners” campaign at Kings College.

Finally, all panellists gave their tips on how they stop themselves from “drowning in anger” at the current state of affairs. These included: connecting with people who are resisting, activism and new business models such as platform co-operatism and green taxis.

To find out more about the Institute for Innovation and Entrepreneurship, please visit our website.