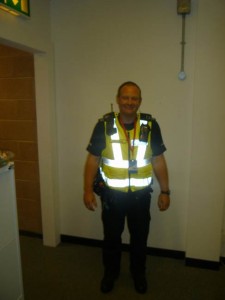 Mark Friskel is a Police Officer who was assigned to the Official Preparations Camp Headquarters for Team GB at Loughborough University from mid-January onwards.

He provided a vital link between the University and Charnwood Borough Council, Leicestershire Constabulary and Leicestershire County Council. He ensured that all the different strategic plans for the Olympic Torch Relay linked and worked together perfectly.

From the start it was clear that there was a lot to do!

The Olympic Torch Relay through Leicestershire comprised two events: the dress rehearsal on the 20th April and the real thing on the 3rd June.

Being involved in the dress rehearsal was exciting as Leicestershire showed people what was involved and how it would look. The whole nation, plus LOCOG, Team GB, the BOA and the IOC were watching us to ensure it all went according to plan.

In addition to the logistics of the torch relay, the traffic controlling measures had to be meticulous as many major routes were affected.

The feedback from the day was very positive with the staffing from the Medal Makers volunteers absolutely spot on!

Now to planning the real thing! The emphasis here was to shape the plans and bring it all together.

We needed to brief as many volunteers as we could and The Medal Makers team helped to set up those briefing sessions. Without those the volunteers may not have known what was expected of them.

One of the highlights of Mark’s work on campus was playing the video of the previous days’ footage of the Olympic Torch Relay on the morning of the 3rd July. Seeing everyone’s faces in the ‘sea of pink’ light up as they realized exactly what they were involved in was inspiring.

They even gave a round of applause in appreciation of the day ahead.

In addition to the volunteers and visitors to campus, local school children filled the Holywell Stadium and the cheering in there was deafening…it certainly helped build the air of excitement and anticipation.

All in all an estimated 9,000 people were on site watching the Olympic Torch go through Loughborough University’s campus.

‘I’ve had a fantastic time on campus working with all the different organization and the Medal Makers volunteers I am proud to have played a key part in the torch relay. It was truly a once in a lifetime opportunity. And now I’m back in reality with the day job with the community engagement team!’