For the past two years I have been working with Loughborough University on the Medal Makers programme to recruit an ‘army’ of volunteers to support the official Team GB Preparation Camp and create a lasting legacy for the area. After all the build-up it is hard to believe that all 550 Team GB athletes, plus 450 support staff, have been to Loughborough to collect their kit and the London 2012 Games are about to start!

I have been lucky enough to play my part in the huge Team GB ‘Kitting Out’ operation that has taken place on campus over the last six weeks. My role has involved scheduling (and in some cases rescheduling!) who is coming and when, checking people in on arrival and most importantly being that happy smiling face as the athletes walk through the door to make their experience a special one from the start. Being an excitable person myself this hasn’t proved to be a difficult task – I could honestly say that every day I have been almost as excited as they are.

For the majority of athletes this is the first time they will compete at an Olympic Games. Some have been a little nervous on arrival and unsure of what to expect whilst others have bounced through the door in anticipation. One thing all of the athletes have in common is the fact that they are buzzing when they leave and many have struggled to find the words to describe the incredible experience of getting kitted out and becoming part of ‘One Team GB’.

On average it takes around three and a half hours for a Team GB athlete to complete their kitting out experience. Following an introductory DVD fronted by Sir Clive Woodward, the first port of call is to Next for fitting of formal wear and Opening and Closing Ceremony outfits (which are top secret and hidden behind closed doors!). The 1948 Olympic athletes offer their words of wisdom via inspirational handwritten messages framed around the room which is a nice touch.

Following Next is a visit to Adidas to try on competition wear, training wear, village wear and podium wear (yes there is even a special tracksuit to be worn for the medal ceremonies!). A team of volunteers take on the role of ‘personal shoppers’, fetching various sizes for the athletes to try on and in some cases being asked for advice on the fit – although with the finely toned athletes I can’t imagine there were too many cries of “Does my bum look big in this?!”

The athletes have their photos taken and are interviewed in the Media Zone which is good preparation for the interest that will surround them in London. They have their hands and feet scanned and the idea of this is to create a lasting memory of every single Team GB athlete to display in the Olympic Museum. The athletes also sign up to the ‘One Team GB’ core values of Performance, Respect, Unity, Responsibility and Pride.

The Team GB Preparation Camp wouldn’t have been able to run without the team of dedicated volunteers that have given up six weeks of their lives to take part in this once in a lifetime opportunity. It has been an absolute honour and a privilege to meet all of the Team GB athletes and I wish every single one of them success at the Olympic Games in London. I will certainly be glued to the Games and will no doubt find myself taking more of an interest in sports that weren’t previously on my radar now that I have met the people that will competing. 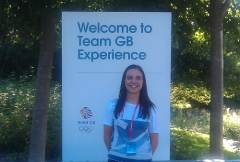