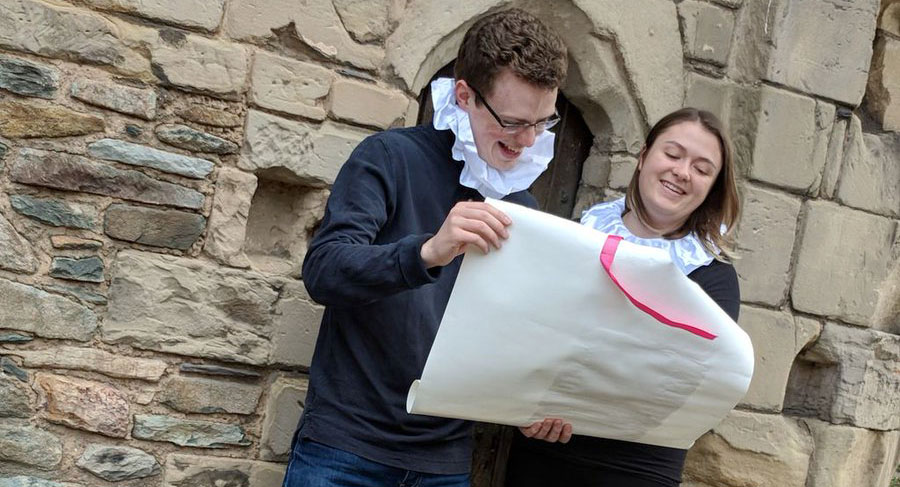 An Afternoon of Fun at Loughborough’s Hidden Historical Treasure: The Old Rectory Museum

On Saturday 21 October two Loughborough academics Sara Read and Lyndsey Bakewell, from the School of the Arts, English and Drama, teamed up with the LSU Shakespeare Society represented by chair Corinne Bills and member Aidan Rainbird-Earley (who is studying systems engineering at the University) together with the volunteers at the Old Rectory Museum in Loughborough town centre to offer an afternoon of joke telling and fun with a historical twist.

Sara and Lyndsey have been researching humour and laughter in the seventeenth century for a forthcoming book chapter in an edited collection, Humour in the Arts: New Perspectives (Routledge, 2018) and a whole new book on the topic which is in the pipeline too. As part of their work, they were supported by the Research Office with funding for a summer bursary to have a student work with them for ten weeks. Corinne stepped up to this challenge and had a summer reading, collating and analysing jokes published in collections 400 years ago – of which there are a surprising number – with titles such as London Jests: or, A Collection of the Choicest Joques. Inspired by what they were reading the team decided it’d be fun to road test some of these ‘joques’ with a modern audience.

The Old Rectory Museum was the perfect setting for this idea since the theme of this year’s exhibition had been focussed on the seventeenth century with their Loughborough in the Civil War Years. The rectory is set in the medieval centre of Loughborough, and the building represents 800 years of the town’s heritage. Standing in its own grounds on Rectory Place on the edge of the modern town centre; the Old Rectory represents a rare survival of a stone built 13th century manor house, and is also one of the oldest rectories in the country. The museum has a collection of historical games such as iron spinning hoops and Nine Men’s Morris a game as old as some of the jokes and even mentioned in William Shakespeare’s Midsummer Night’s Dream.

One of the most popular jokes on the day was a rather controversial one which has a local connection the Nottinghamshire village of Gotham:

A Conceited pragmatical Londoner travelling to Goatam, met a poor fellow coming from thence, thinking to shew his wit said well met wiseman of Goatam, how far to the place of thy Nativity? I cannot deny (said the poor fellow) but that my Country is a shame to me, but you proud Londoners are a shame to your Country.

Some of the other most popular jokes are below, have a read and see which ones tickle your funny bone!

As you can see from the last one, those rushing to style current print media ‘Fake News!’ is yet another stereotype we have inherited from our history.

The final joke is one which puns on perennially funny toilet humour and was undoubtedly the star of the day:

A Citizen that was more tender of himself then wife, usually in cold weather made her go to bed first, and when he thought her plump buttocks had sufficiently warmed his place, he then came and removed her out of it lay in it himself; and to make himself merry, called her his warming-pan; she not being able to endure this indignity any longer, one night (Sir Reverence) she did shit a bed; he leaping into it, and finding himself in a stinking condition, cried out, ‘O wife, I am beshit!’. ‘No husband’, says she, ‘it is but a Coal dropped out of your Warming-pan’.

And on that note, we’ll finish with a reminder that The Old Rectory now houses a museum run by the Loughborough Archaeological and Historical Society and welcomes visitors each Saturday 11am to 3pm from April to October. If you’ve not been yet put a note in your diary to rectify this next season and enjoy a free afternoon to steep yourself in local history.

LSU Shakespeare Society’s next production is William Shakespeare’s The Tempest on next month.