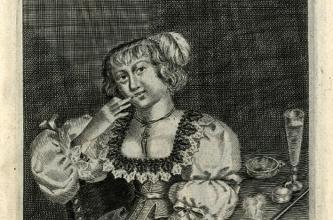 Dieting and Weightloss in the Seventeenth Century

According to a 2015 UK Government report, up to a quarter of the British population are classed as obese. This figure, which has risen dramatically in the last 20 years, is matched by the boom in the diet and weight-loss industry which has an estimated global turnover of some £200 billion. Obesity is measured by calculating the ratio of a person’s weight to their height.

While current levels of obesity are unprecedented, ideas about how best to lose excess weight are recorded since the time of Hippocrates at least. The term ‘obese’ became naturalised into the English language in the 17th Century. It was during this century too that the population had access to sugar in increasingly affordable quantities.

Nowadays, the NHS advises trying to lose no more than one to two pounds of excess weight a week by decreasing your calorie intake while at the same time increasing your exercise levels. It might be surprising, in the light of all the fad diets that circulate, that this is exactly the same advice a 17th Century physician would proffer.

Respected doctor Thomas Lodge wrote that ‘surfeit and excess’ were what made you fat and this was exacerbated by a sedentary life-style, too much wine, and eating dairy products (known as white-meats). Other authors gave more quirky advice and some early dieting tips included:

There was no equivalence of metabolism at this time, but we might be tempted to think that eating garlic cloves is the sort of thing someone looking to increase their metabolism nowadays might think worth a try.

The vinegar and pepper would act as a purge for the system, the way that some nowadays swear by a glass of hot water and with lemon to try to ‘cleanse’ their systems.

Not sleeping so much was logical under the humoral model as this understanding of the body saw sleep as the final stage of digestion. If you couldn’t completely digest your food then it was likely to pass through and out of the body without turning into fat.

The fact is though that medics then as now knew that the best way to lose weight and to stay fit and healthy was to eat less and move more.

To read more about attitudes to weight in the seventeenth century, see Sara Read’s latest article in the Discover Your Ancestors periodical (issue 5). You can order a copy online.

Dr Sara Read is a lecturer in English at Loughborough University. Her popular history of women’s lives: Maids, Wives, Widows: Exploring Early Modern Women’s Lives, 1540-1740, includes fascinating snippets and anecdotal evidence about how people lived in the past. Follow her on twitter @Floweringbodies.