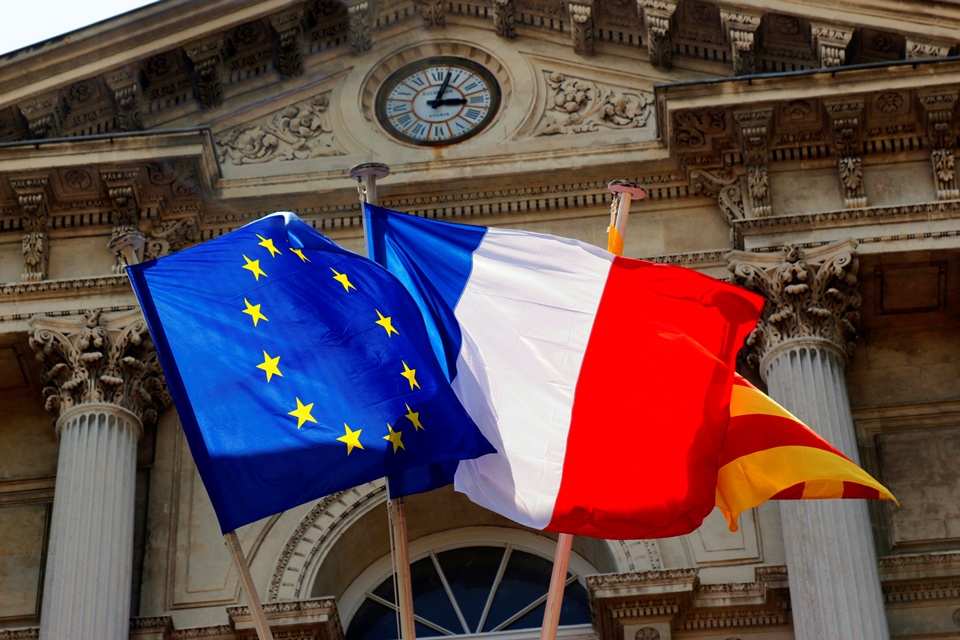 Macron and the future of the European Union

Helen Drake, Professor of French and European Studies, discusses what impact Emmanuel Macron, the newly elected president of France, may have on the future direction of the European Union.

On Sunday 14 May 2017, French president-elect Emmanuel Macron became the eighth president of the Fifth French Republic. In line with Article 5 of the 1958 Constitution and in his function as Head of State, President Macron will be invested with the role of ‘guarantor of national independence, territorial integrity and due respect for Treaties’. Macron’s predecessors have without exception interpreted this clause as an invitation to conduct France’s relations with the EU from the Elysée (presidential) Palace.

The EU’s own emphasis on summit diplomacy, where he is one of a very few heads of state amongst mere heads of government, provides the French president with a very public stage for playing this role.  Macron for his part has embodied an emotional commitment to European integration, and given every indication that the EU will absolutely continue to be part of what Robert Ladrech in 1994 called the ‘organizational logic’ of French policy-making.

In this, Macron was diametrically opposed to his second-round rival Marine le Pen, and by choosing the EU’s (Beethoven’s) Ode to Joy anthem as the mood music for his 7 May victory event at the Louvre, Macron could not have been clearer that this was a difference that counted.

There is every chance that Macron will travel to Berlin to meet German Chancellor Angela Merkel on the very day that he formally becomes French President, as did his immediate predecessor François Hollande. A critical success factor of Macron’s plans for France and the EU is to somehow repaint the Franco-German relationship in French colours.

Macron wants to empower the EU to finally act – on migration policy, on the environment, on the inequities in the single market. He wants Berlin to want to loosen its grip on Eurozone governance; to want to share the responsibility. Unencumbered by political party baggage in France, and since his cosmic-scale run of luck seems set to continue in the form of the soft spot of Germany’s forthcoming federal elections, President Macron may just be able to recalibrate the Paris-Berlin friendship, despite the odds. In this regard as in so many, he is, for now, fearless and unapologetic.

In the UK, Macron’s determination to rebuild France’s role in the EU has invariably been passed through the Brexit filter to render it fit for public consumption. It is just so easy to lampoon EU policy-making as an anti-UK conspiracy, especially when Germany is involved, and inevitably if both France and Germany are in the frame; readers can join the dots for themselves.

Macron’s tough campaign rhetoric on Brexit is somehow taken as a literal guide to the French and EU27 negotiating positions on Brexit. It’s not.  Brexit is about how the UK government fleshes out its definition of the ‘right deal’ and the ‘national interest’, to lift Secretary of State David Davis’s words from the Government’s February 2017 paper ‘The United Kingdom’s exit from and new partnership with the European Union’. It is about the red lines that the UK will draw, and how they defend or cross them.

Brexit will flow from the UK government’s success in identifying and aggregating its domestic interests and negotiating them adroitly with the EU27+ parties involved.  Brexit will emerge from the dynamic daily interplay of interests that characterise any international negotiation. The stage for all acts of the Brexit performance offers far more scope for creativity and role play than the public persona of current Brexit diplomacy would suggest.

It will be very hard for Emmanuel Macron to successfully implement any of his proposals for an overhaul of contemporary France; literally, any of them, domestic or international.  The French daily newspaper Le Monde had, before Macron’s victory, already identified 17 of his flagship policy initiatives as either ‘vague’, ‘complicated’, ‘legally fragile’, ‘requiring a parliamentary majority’ or ‘contradictory’.

Who knows whether Macron will win a presidential majority in the French National Assembly elections in June this year? Who knows what domestic resistance he will encounter at such a turbulent time in the Fifth Republic’s history? Why wouldn’t President Macron seek out friends and allies within the European Union?

The Franco-German relationship may be the most institutionalised partnership within the EU (its foundations were laid in the 1963 Elysée Treaty between both countries), but the Franco-British relationship counts too, and predates both the Paris-Berlin bilateral and the EU itself.

Emmanuel Macron founded his En Marche! movement and began writing its programme before the UK voted for Brexit. However it may appear through the time-warp of UK-EU relations, Macron’s EU policy really, really is not all about Brexit.

Helen Drake is a research leader for The UK in a Changing Europe and Professor of French and European Studies in the Department of Politics, History and International Relations at Loughborough University.