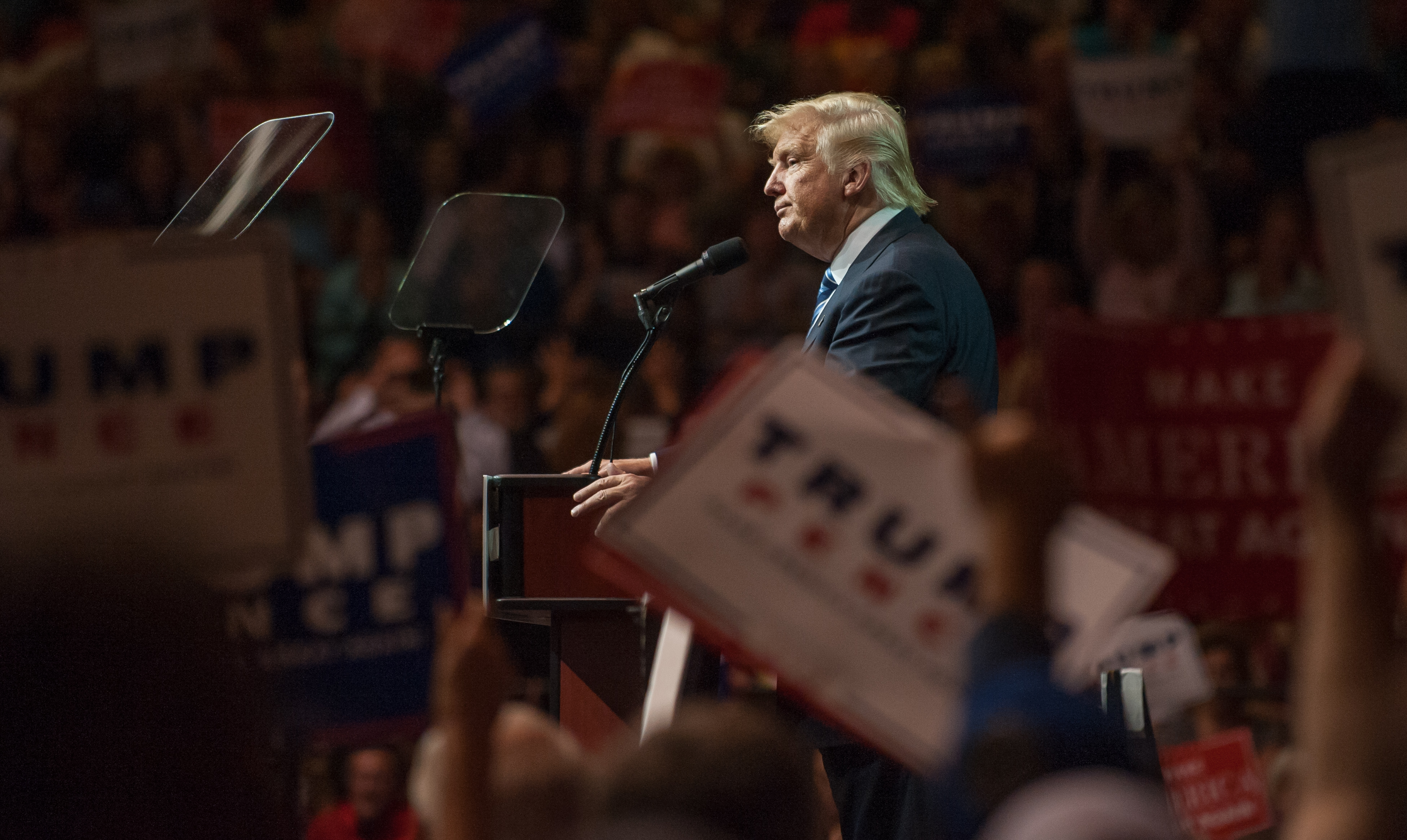 Trump: the vengeance of identity politics and emotionalism

Our experts take a look at Donald Trump and the politics of identity and emotionalism in America.

Let us start with an imaginary situation: it is 2006 and we predict that a decade later Donald Trump would be the GOP’s nominee for the US presidency (with a reasonable chance of winning it), that Nigel Farage’s proposals would materialise in a referendum that is pushing the UK towards the EU’s exit door, and that Marine Le Pen has realistic chances of residing at the Élysée Palace.

These huge political transformations would indeed seem unimaginable. Yet, they happened, and they seem to share one common characteristic: they have at their centre figures that may be placed on the populist Right of traditional political spectrum.

These figures are all, one way or another, part of the economic or political establishment of their own countries, and yet they are able to appeal to the electorate by positioning themselves as fundamentally anti-establishment. They claim that they alone can give a voice to those who have become disenfranchised by big interests, globalisation and technocratic elites, and that only they can deliver democracy back to the people and restore a past greatness that has been lost in between.

We contend that this new Right presents elements that need to be understood in their own terms. To put it provocatively, some parts of the Right seem to be undergoing a transition that shows some analogies to the way in which in the 1960s a New Left challenged the certainties of the Old Left. We would like to suggest that the tide that has brought up these new influential figures to the centre of our political scenes is akin to a cultural, indeed an emotional, revolt.

If we focus on Trump, one first thing to notice is that he is a unique phenomenon in the recent history of the Republican Party.

There have been other ‘outsiders’ to the party machine who made some noticeable impact in GOP primaries, such as the paleo-conservative Pat Buchanan in 1992 and 1996, or the libertarian Ron Paul in 2008 and 2012. Yet neither candidate eventually won the nomination and they gave expression to ideas with a long tradition within the US conservative milieu. Even the Tea Party, the grassroots movement that sprung up as a reaction to the 2008 financial crisis and the US governments’ bailouts, has little in common with the ‘Trump train’: it expressed the American principles of limited government, individual rights and religious conservatism. Trump, however, upholds none of these values. Instead of the individual, he puts forward the collective, a ‘we’, that is supposedly currently under threat and whose only hope is the emergence of a new kind of charismatic leader, i.e. himself.  Whereas the GOP, at least in theory, favoured solutions through the power of the market (including free trade), Trump favours political solutions, such as tearing down free-trade agreements. And whereas the language of American republican politics is unmistakably Christian, Trump’s religious beliefs remain secondary.

Above all, Trump promotes a pragmatism of ‘whatever works’: short-term solutions and practical gimmicks seem anyway to be more popular than ideological consistency and a political plan based on principles or policy details.

Trump’s speech in the Republican National Convention last July did not offer a single detailed proposal, with the possible exceptions of building the infamous wall with Mexico and cutting ‘better’ trade deals. So, how can America become great again? As he mentioned towards the end of his speech, the key is ‘to believe’ that American can become great again. Here lies a key to understanding the Trump’s version of the Right: its strong emotionalism.

As the white supremacist and Trump supporter Richard Spencer mentioned in an interview, “I think with Trump, you shouldn’t look at his policies. His policies aren’t important. What’s most important about Trump is the emotion. He’s awakened a sense of ‘Us’, a sense of nationalism among white people.” This is an interesting (and scary) development.

The politics of identity – with a more or less clear emphasis on emotionalism in order to form a consistent narrative – has been a trademark of the new Left ever since the 1960s.

Back then, the Left wanted to revolt against the established, yet weakening, bourgeois values of their time. Therefore, provocation, in terms of style, sexual attitudes, or music was central in their repertoire. To be sure, the emotionalism of ‘liberal’ or ‘progressive’ politics had tended, at face value at least, towards greater freedom and inclusivity.

But new Right-wing emotionalism has succeeded in pushing semantic boundaries and trying to normalise as almost acceptable, intentionally provoking racist statements on immigrants, Muslims and various symbols of what they consider to be ‘the establishment’. Interestingly, the ‘golden boy’ of this cultural milieu is a self-conscious provocateur: the Breitbart tech-editor Milo Yiannopoulos. In an article co-written with Allum Bokhari, he describes the so-called ‘alt-Right’ (an umbrella term used to describe various anti-establishment trends rising on the periphery of today’s conservatism) as the equivalent of the 1960s hippies. Yet, rather than conservative bourgeois morality, the sacred cow that now needs to be attacked is itself a major cultural result of the 1960s: political correctness. Yet, Yiannopoulos and Bokhari tell us that we should not rush into conclusions: theirs is the expression of a playful rebellious attitude, rather than the prelude to brown shirts. In their own words, all this is “not racism, the restoration of monarchy or traditional gender roles, but lulz”. We do not really know whether they are taking themselves seriously, but the political implications remain real.

You can’t say that

Trump or Farage’s ubiquitous use of terms such as ‘political correctness’ or ‘the establishment’ is telling. This denouncing of ‘political correctness’ operates as a gesture of denouncing what the alt-Right sees as the opinion-making, left-liberal elites that supposedly dominate media, education and politics. Although an opposition to speech codes and a suffocating ‘you can’t say that’ attitude that is present in today’s culture can, and should, be based on the notion of individual rights, Trump seems to be no great advocate of freedom of speech (e.g. his threats to the Washington Post and his idea of shutting down parts of the internet). Provocation is just another practical tool and the narrative of freedom can be followed in the next breath by that of authoritarianism and of ‘low and order’.

There are good reasons to consider current emotionalism and identity politics – now present in all parts of the political spectrum – as a ‘substitute’ for the inability to come up with concrete ideas and/or to offer workable solutions to intractable problems. Thus, it is no surprise that emotionalism and identity politics play such a central role in the bereft of ideas in today’s politics.

At stake here, on a tension that cuts through both the Left and the Right, are two sets of political premises. On the one hand, the cornerstones of modernity, such as reason and the universalism of the ideas of liberte, egalite, fraternite, seem to struggle to find their place in times of crises. On the other hand, these values stand against an emotionalism of ‘decline’, of ‘fear’ and of the lowest common denominator of identity politics. Sure, Trump and the alt-Right are novel phenomena, but they only reflect tendencies that have been present for some time now. Unfortunately, the road ahead of them seems to be open.

Dr Daniel Chernilo is a Reader in Social and Political Thought in the Department of Social Sciences. He is particularly interested in the relationships between natural law and social theory, nationalism and cosmopolitanism, and the problem of universalism in modern normativity.

Dr Nikos Sotirakopoulos is a Lecturer in Sociology in the Department of Social Sciences. He is interested in how, in the last decades, some of the core values and concepts of the modernity project, such as economic growth and individual agency, have been problematised in the narratives both of the New Left and of the political and intellectual elites.