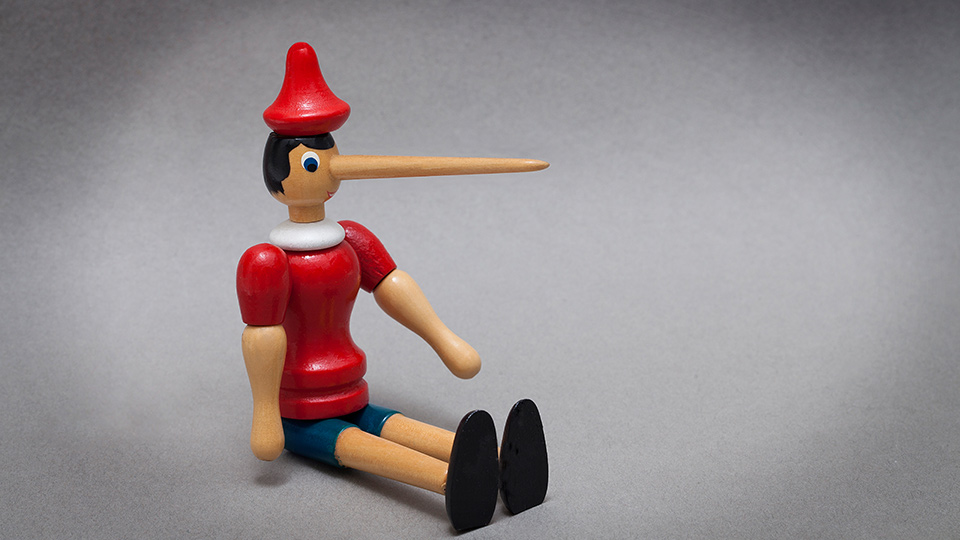 Everybody has to lie: Is honesty always the best policy?

Everyone thinks lying is bad – but is being honest always the right way to go?

Today (Tuesday, April 30) is World Honesty Day and in keeping with the occasion, Loughborough University’s Discourse and Rhetoric Group have written a piece that discusses what ‘being honest’ really means, and how people actually do it (or not).

Remember the last time you passed a colleague in the corridor at work, and said “hi, how’re you”? As we pass each other, we respond with “fine, how’re you?”.

This isn’t the moment, as Octavius Machell puts it, “to discuss the crushing reality of existence”.

In fact, the founder of conversation analysis, Harvey Sacks, famously wrote an article entitled, “Everyone has to lie”.

We might privately interpret the way “fine thanks” was said as evidence that our colleague is not fine at all but isn’t going to say more right now.

Necessary dishonesty, or necessary lies, keep the wheels of sociality turning. We make distinctions between ‘white’ lies (the obligatory, not-hurting-anyone lies) and malevolent, dangerous lies – the kinds that may be consequential in all sorts of ways.

The fact is, the study of ordinary talk reveals that the tides of honesty and lies and dishonesty ebb and flow.

We accompany questions like, “does this outfit look good?” with “be brutally honest!”.

The notion of ‘brutal honesty’ tells us that there is such a thing as too much honesty – or too direct a statement – which needs mitigating to reduce the impact of our honest assessments, news deliveries, and so on.

We use linguistic tools to soften the tone of what we say (e.g., “I’m afraid”, “I’m sorry”, “to be honest”, as well as accounts (“I’m only trying to help” etc.)) which reveals that there is a norm in place, on occasions, for politeness to trump honesty.

What counts as dishonesty partly depends upon what is at stake, and to whom.

Imagine the ‘mystery shopper’, who may call up a pharmacy and ask for advice that they don’t need, or at least need right now.

Is that being dishonest, or providing a useful service in checking that the pharmacist is sticking to medical guidelines?

As we noted above, what can happen is that being honest is not the only norm in play. Is the mystery shopper lying or faking, and what’s the difference?

Or take the person trying to look like someone else, not just in a phone call, but for life: sociologists use the term ‘passing’ for the performance of membership in a category that is different from one’s own.

A person may attempt to pass for reasons such as social acceptance, inclusion, privileges, or self-preservation.

For example, sociologists have written about African Americans ‘passing for white’ as a survival tool in periods of deep segregation.

We may change our accents, dress, posture, and all sorts of other behaviours to pass.

We may pass (un)intentionally as younger or older than our biological age, which can open up or close down everything from (il)legally buying alcohol to darker activities such as sexual relations.

Issues of honesty are never far from our mundane ordinary spoken talk, either.

For example, we say – and notice, and complain about people saying – phrases like, “to be honest”, “honestly”, “honest to God”, and “if I’m honest”.

But why and when do we say such things?

The British philosopher of language, Paul Grice, best known for his theory of ‘conversational implicature’, described a series of maxims for communication, underpinning what he termed the cooperative principle – “Make your contribution such as it is required, at the stage at which it occurs, by the accepted purpose or direction of the talk exchange in which you are engaged” (Grice, 1989, p. 26).

The former, then, with the addition of ‘to be honest’, seems to break the rules.

Why do people feel the need to point out that they are telling the truth? Are the rules wrong?

The answer lies in studying how people actually talk, rather than the armchair theorizing which is so common in academic and popular notions of how people communicate.

And, as Derek Edwards and Alessandra Fasulo have shown, people say things like “to be honest” in surprisingly systematic moments in conversation, for systematic reasons – often to deliver what conversation analysts call a ‘dispreferred’ turn.

Examples of dispreferred turns include turning down an invitation (acceptance is preferred) or disagreeing with an assessment (agreement is preferred).

Using an ‘honesty phrase’ is one way that people handle doing negative (but completely regular and normal) actions.

For example, if asked “do you like this coat?”, there is an interpersonal requirement to be nice; remember – everyone has to lie.

In some circumstances, saying “it looks great” doesn’t really matter. But in others it matters more.

So, a response that starts “to be honest, I really don’t” is a useful strategy to say what you think for good and honest reasons, rather than being rude, unsupportive, or contrary.

Similarly, if invited for dinner, responding with “no, I’m tired”, could sound pretty rude. Instead, we might say, “to be honest, I’m really tired”.

And when someone says, “I absolutely love that movie!”, we may respond by saying “I honestly thought it was awful”.

So, on World Honesty Day, think about the contexts and contingencies in which being honest or dishonest becomes important.

Ask what’s best depending on who you are talking to and what you are doing. And remember that, sometimes, the very best policy is … dishonesty.