Research Councils UK have devised Common Principles on Data Policy. This establishes their position on the management of research data produced by projects they fund, as well as taking steps to making data publically available.

Each Council has slightly different requirements in relation to proposals for funding and the research data arising from the projects they fund. The Digital Curation Centre have pulled together a useful summary table together with information on funders’ data policies. See their Overview of funders’ data policies web page for further details.

This post makes an interesting addition to earlier posts regarding our UK HEI Research Data Management survey and the benefits of being part of the JISCMRD programme.

We looked at the survey results and DCC engagement institutions to see whether there was any evidence to suggest that institutions with RDM services in place received DCC support. 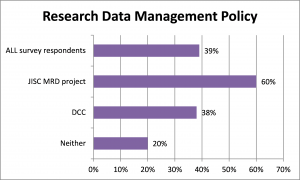 Similarly, 15% (2 out of 13) of those receiving DCC support had a research data service in place, but this proportion falls to 7% (1 out 15) for un-supported institutions. 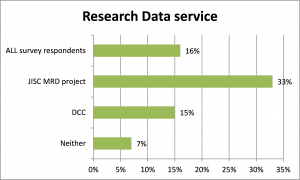 Thus support, whether through funded projects, DCC support or a mixture of both has a significant impact in policy development. This applies even when such development is not a condition of funding; only MRD-funded projects had such a requirement.

It’s worth noting some overlaps between JISCMRD and DCC support. A few of the institutions in our survey had a bit of both. More generally DCC helped facilitate JISCMRD workshops and have a continuing brief to promote its lessons across other institutions.

This blog post has been removed because the information it contained is now out of date.