David Roberts: Active learning in lectures – the value of imagery

Not long ago on these pages, in June this year, I outlined the pedagogic research I had been leading at Loughborough University.

To recap briefly, I was concerned with the question of student engagement in large group lectures – an issue familiar to many teaching colleagues confronted with the government’s never-ending agenda for High Education (HE). Given that lectures are the means by which we disseminate most learning to undergraduates the world over, and given that we use PowerPoint or other associated digital platforms to do this, I was interested in Richard Mayer’s research on Multimedia Learning (MML) that predicts better audience engagement if images were used with words, instead of just words. His position is based on decades of research on memory and cognition that tells us we are ‘dual processors’ of information. We are equipped with an auditory-textual channel and an image processing channel, so to him and many others, it was silly to be shoveling primarily words into both our ears and eyes. 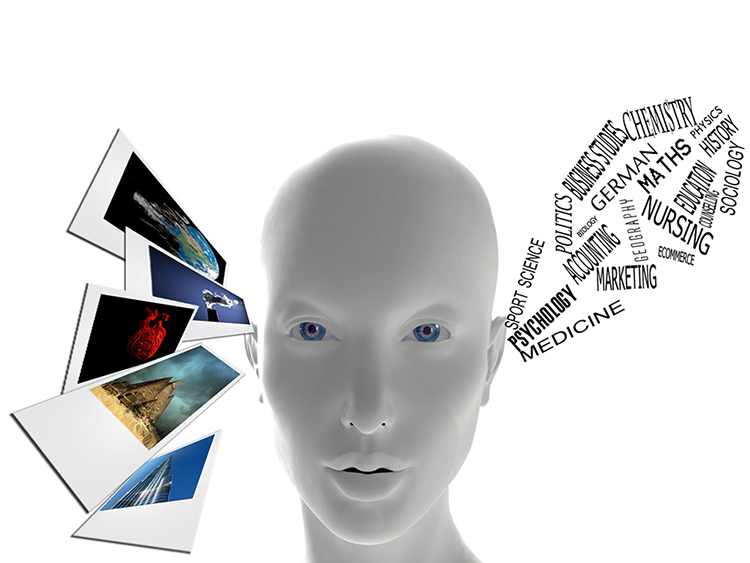 I developed an image-based method of lecturing (keeping text in the notes view section of PowerPoint where desired) that reflected these cognitive positions, teaching across 9 disciplines in all. My last blog reported on a 3-year evaluation of the method with my own students as the subjects who were reporting the method’s effects.

The results are summarized below: 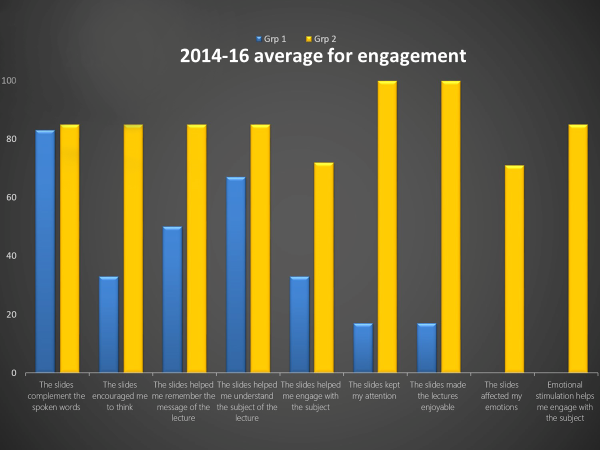 This data confirms Mayer’s predictions and the method has been very popular with students. In my Final Year option, the percentage of ‘firsts’ in coursework results verified by the second marker and external examiner increased by more than 50%. The pattern in the chart above has been mirrored when the same questions were applied with dyslexic students, and this is the subject of another post later this year.

My initial interest in this research had been inspired by broad problematising of the lecture as a medium for higher learning. Lectures are criticized on many grounds, not least of which is their immobility in an era when people expect to be able to get such material online at home. However, I was more concerned with ontological and epistemological challenges to lecturing that characterize the learning process involved as passive in nature. In this scenario, an esteemed academic or ‘sage on the stage’, as Alison King described it, holds the greatest wisdom and imparts it to his or her students, who consume the information as it is directed to them – that is, uncritically and unreflectively.

This convention has been challenged by those who favour the idea of ‘active learning’, a notion that includes and reflects the ideas of ‘problem-based learning’ and ‘inquiry-based learning. So active learning is understood as ‘meaningful learning activities [in which students] think about what they are doing’ (Prince, 2004, p. 223).  Clearly, it would be very challenging to run a lecture composed entirely of such prerequisites, since it implies a surrendering of the lecture space to a more interactive process much harder to organise, predict or manage.

Based on what I had unintentionally learned in the earlier focus groups on engagement, I expected some minor presence of active learning processes as a result of image use. However, the results refuted this assumption. All key elements of active learning were present in abundance, and mainly it concerned problem-solving activities. 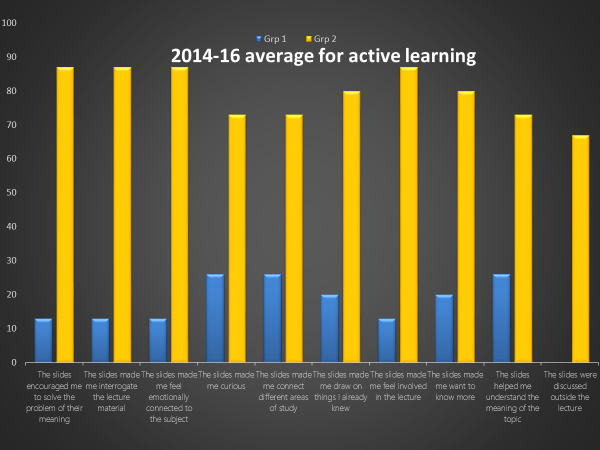 The chart compares the presence of active learning characteristics as displayed by the control and test groups, as per the earlier methodology. The control group exposed to text only is shown in yellow. The test group exposed to images appears in blue. The pattern is again clear and the differences substantial, reflecting a similar asymmetry in results to that concerning engagement.

Conclusion
Testing MML theories for engagement by introducing apposite images into lectures had confirmed the value of images in generating engagement. An unexpected outcome in those initial tests led to further testing of the MML method for the presence of active learning processes, where predictions were exceeded substantially. Although the number of participants has been fairly low, ranging between 15-60 students, the results have been consistent across the board and may serve as pilot study data to substantiate a bid for larger scale finding such as a National Teaching Fellowship Scheme. But more than this, they affirm other ways of teaching that are easy to achieve and which can turn lectures from places of passive boredom and disengagement into spaces of curiosity, inquiry and engagement.

This Blog post was written by Dr David Roberts, Senior Lecturer of International Relations and member of the International Business, Strategy and Innovation group at the SBE.