The headlines on Friday the 24th of February all featured Claudio Ranieri being sacked from Leicester City Football Club – 9 months on from winning the Premiership last year but having had a dismal performance this season. 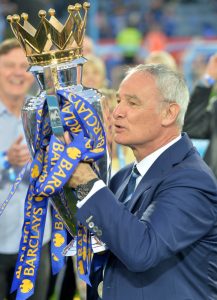 Whilst there are many heated debates around the UK about this – if not the world as Leicester has a huge global following – as a management scientist I am interested in the data behind the decision and the theories that may explain their judgments.

Regression fallacy
Behavioural decision science can explain the reasons behind the decision to sack Ranieri. The relevant concept here is called regression towards the mean: the performance of a system tends to move towards its average after an exceptional performance.

If we consider the overall performance of Leicester City, it has been historically quite weak: the last time the team was in the Premier League before moving back in 2014/15 (14th position) was in 2003/04 (18th position).

In addition, it has the third lowest wage bill on players in the League, a strong predictor of a team’s performance.

It is thus no surprise that the chances given by the bookies at the beginning of the winning season that Leicester City would win the Premiership, were the same as Justin Bieber becoming the president of the USA!

The regression fallacy, which affected supporters and the media, attributed the main cause of LCFC’s success to Ranieri. While not being a football expert, given these data, I believe that winning the Premiership was due to a number of different factors instead: players that were outperforming that year, team spirit, a good coach and, indeed, luck!

Now, nine months on and the regression fallacy strikes again – this time pointing the finger at Ranieri as the cause of the team’s poor performance.

LCFC was bound to have a difficult season
But what is the truth? If you analyse the data, it was a regression to the mean – the team is back to the average weak performance that their historic data show. This is a well-known phenomenon in sports. For instance, NBA players with an exceptional first year (‘rookie’) season frequently disappoint in the following season, as it was the case of Carmelo Anthony when playing for the Denver Nuggets.

So, from a behavioural decision science perspective, it was wrong to blame the coach. Leicester City was bound to have a difficult next season after winning last year.

There are many of these fallacies and biases in judgments – and it’s crucial that managers and decision makers are aware about them and minimise their biases when making important judgments.

Decision sciences has a lot to offer and the School of Business and Economics at Loughborough University has extensive expertise in this field, from conducting research on how to improve judgments and decision analytics, to enterprise activities, such as helping organisations to improve its decision making processes.

Sports management can benefit extensively from learning more about this important field of Management Studies – and avoid being trapped into poor judgments and ill-thought decisions.