When I started lecturing 30 years ago my “training” suggested that the lecture was “the art of the effective explanation”. I liked that – even if, as an inexperienced academic, I really needed someone to effectively explain many of the concepts I was lecturing to me!! 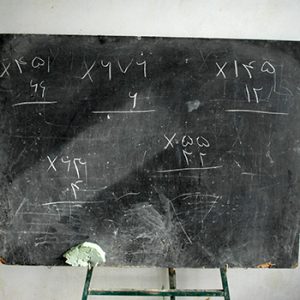 The media I used was the pre-handwritten “acetate”, positioned on a lightbox or Overhead Projector (OHP).  Many colleagues still used chalk and blackboards but that appeared to me to be a health hazard.

As I became more accomplished this was augmented by the “acetate roll” which allowed live drawing of charts and diagrams.  In this scenario, students developed speed-writing skills as they hand wrote lecture notes.  Words on expensive slides were kept to a minimum and the lecturer’s own voice was not only heard, but listened to.

Then, about 20 years ago, presentation in lectures became rather more professional.  Into our lives came Microsoft PowerPoint (there had been earlier software solutions such as Lotus Freelance). “Slides” were printed onto “acetates” and copies of the slides made available to students (three to a page with space for notes).

Students had the framework of notes (they thought) and so annotated the slides, hoping that they would be able to decipher them later. Slowly, lecturers realised:

Today, the rise of the VLE and the move towards paperless lectures means that lectures often open with a chorus of laptops and tablets being switched on, screen covers being raised so that all of the lecturer sees is an array of IT company logos and the lecture is accompanied by the clatter of keyboards.

I do feel that technology has played its part in a skewed HE environment and has taken the focus of the lecture away from the student to a focus on the delivery.  The “partnership” of speaker and listener has broken down.  Why listen when I can read it, record it or even look at the lecture captured event later on?

So, how do we re-capture the lecturing high ground?  How do we wean students from a diet of passive consumerism?  Perhaps we should go back to thinking just how we can provide EFFECTIVE EXPLANATIONS without the need to be supported by technology.  Perhaps we should focus far more on LEARNING than on delivery.

This Blog post was written by Dr Keith Pond, Senior Lecturer in Banking and Economics, as part of his active Blog site ‘Keith’s Learning and Teaching Blog‘. Aside from being a keen blogger, Keith is also a member of the Accounting and Financial Management discipline group and Leader of the Business and Economics Education Research Interest Group. Keith can be reached on K.Pond@lboro.ac.uk.