This Blog post was written by Dr David Roberts.

Higher Education has been concerned with the matter of ‘engagement’ for some years now; I’ve blogged on this before, so I don’t want to reinvent the wheel. But in brief, student engagement can either be thought of as being concerned with academic content (the intellectual material we teach them); or ‘relational’ in nature (relationships between students, their peers, their lecturers, and the various elements of a given educational institution, like the Students’ Union).

I’m concerned with the former, and this has most famously been divided into the areas of cognition, behaviour and affection, or emotion. 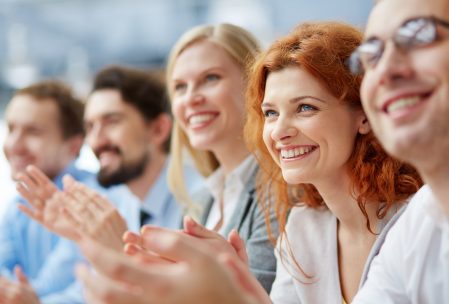 The latter is the least well-treated; it conjures epistemological horrors like looking at individual subjectivity and impossible and ineffectual generalization. I’m interested in that one – the one Ella Kahu, a leading light in engagement matters, says we need to think about more (2013).

But before you run screaming from this page, muttering about infinite subjectivities and impossible research methodologies, I’m not concerned with ‘the pleasant and unpleasant emotions students connect to their relation­ships with teachers, peers, and school’ (Davis, Summers and Miller, 2012: 25). I’m interested instead in student emotional engagement with academic content, or ‘constructive, enthusiastic, willing, emotionally positive, and cognitively focused participation with learning activities’ in lectures (Skinner and Belmont, 1993: 579).

More specifically, if emotional engagement is good for learning, I’m interested in whether images generate more emotional connection with academic content than text does, in this most visual of eras. Readers of any of my other blogs will recognize that my main area of interest is in Multimedia Learning – the idea that we engage better with words and images, than with words alone, because sighted people process information through a visual channel as well as its audio-textual counterpart.

They will also likely recall that the worlds our students come from and depart to are enormously visual, but that their time with us is mostly textual, at odds with the wider world and with leading research on how we engage and learn.

We now know student cognitive engagement with academic content is higher when good quality apposite images are used with limited text, than when just text is used (Roberts, 2017). We also know this applies across multiple disciplines, since the issue is about the objective physiology of visual processing rather than the subjective interrogation of academic material (Roberts, 2017).

I want to know if this applies at the emotional level, partly because ‘there is an emotional intensity attached to the experience of learning that is often overlooked’ (Askham, 2008: 94), and partly because it’s a predictor of better learning, according to the engagement literature (Buckley, 2014; Gibbs, 2010; Kahu, 2013; Trowler, 2010). 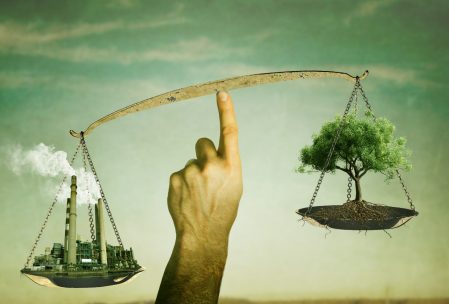 The subjects of the research are to be students. This is partly because their absence in research on student engagement has been remarked upon in reputable scholarship (Trowler, 2010), and partly because other methods of studying emotional engagement like ‘observations and teacher rating scales’ are held to be ‘highly inferential’ by some (Appleton et al., 2006).

I wanted the data from the horse’s mouth. This meant that the research methodology would have to be designed around a cohort that is on the one hand, easily accessible but, on the other is already overburdened with requests for participation in a variety of University-originating exercises. These include sessional and seasonal assessment and social activities but also module feedback, NSS surveys and other surveys, to name a few.

Students often consider themselves often to be overwhelmed with participatory projects to the extent that, as I have found in previous research exercises, their time is too limited for participation in research. That earlier experience has led me to think about remote access off campus through websites, and a rudimentary website had produced useable research data.

The site’s redevelopment was the subject of a successful ‘Principles for Responsible Management Education’ (PRME) seed corn bid, and the result is a website that can be adjusted for a variety of survey needs associated with student engagement. It can also be rented to other departments, schools and institutions so they can repeat or expand research testing around the visual learning research agenda. 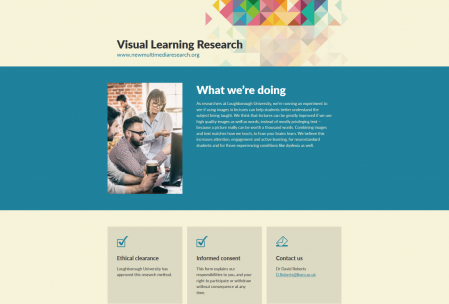 For the purposes of the research programme, the site is to be disseminated to targeted student cohorts, the first of which will be dyslexic students. This has been facilitated through cooperation with the Disabilities Office, and the survey will stay open for a month and is incentivized with a £10 Amazon voucher per competed survey (in line with ethical standards here and elsewhere, and with evolving research norms beyond the academy).

Once participants go to the site, it randomly assigns them to one of two pages, each of which carries a video of an 8-minute PowerPoint presentation on global warming. One presentation is conducted with text, and the other with images and text. An identical soundtrack accompanies both.  Testing so far with earlier cohorts has revealed marked differences regarding cognitive engagement.

In the table below recording three years of longitudinal data, the yellow columns indicate engagement reactions to slides with images and text, compared with their blue counterparts recording levels of engagement with slides made of text only. 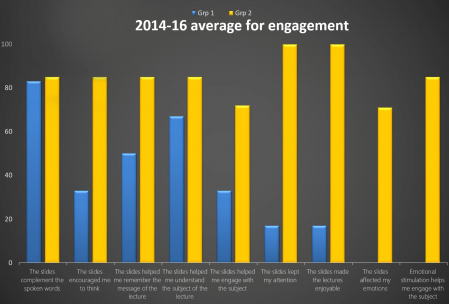 The expectation is that, once we have a reliable research portal, coupled with incentivization, we will have a statistically-significant set of quantitative survey data indicating comparative levels of emotional engagement between slides using images, and those adhering to textually-hegemonic convention. We anticipate that levels of emotional engagement will parallel those of cognitive engagement, and we look forward to sharing those findings in a later post.

This Blog post was written by Dr David Roberts, Senior Lecturer of International Relations and member of the International Business, Strategy and Innovation discipline group. David can be reached on D.Roberts@lboro.ac.uk