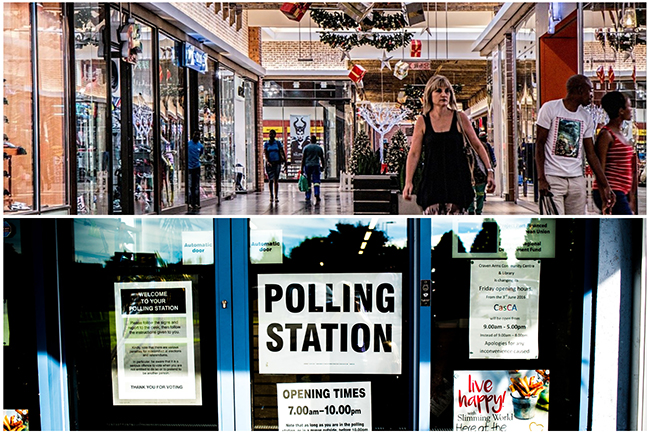 Politics and economics have much in common. For a couple of centuries these weighty subjects taught in many a fine University were and, in recent decades, are recognised as a single taught subject – Political Economy – but also share similarities in modelling human interaction and achievements.

This a perfect time to highlight the similarities between the Black Friday consumer event and the 2019 UK general election.

In both scenarios we have a class of players – politicians or retailers – whose survival depends on another class of players – voters or consumers. The only difference is that the payments are more tangible on Black Friday but in politics although you pay with a free vote the politician can take a stream of your income over years in taxation whilst your benefits are perhaps even less tangible than a new iPhone. But perhaps the greatest difference is that buying a product normally only impacts on you and your family whilst the 2019 election choices can and probably will have both national and global repercussions.

The hype that surrounds the election period and any consumer sale event stirs up many emotions among both voters and consumers, in some ways we see the best of us – striving for a better world but perhaps exhibiting the worst of ourselves – short term individual greed and selfishness.

It’s well known that politicians are economical with the truth, but for many of the major global choices the UK needs to make very carefully and diplomatically it is likely that some politicians will produce so many porky pies (lies) this election that Melton Mowbray (a major pork pie producer in East Midlands) might go out of business! In the consumer world Which found that 87% of Black Friday deals in 2017 were available at the same price or cheaper at other times.  So beware of false claims and do your research.

Politicians often focus on one element of potential policies like NHS funding, immigration, Brexit/Remain etc. not about flood defences, moving from oil to electric transport, care for the elderly, funding students. These are designed to make them look good, give them a clear brand in the public eye, dodge the difficult questions, appeal to their ‘type’ of voter. Basically, they aim to create a nice shiny product that everyone recognises and buys into. Many of the Black Friday deals focus on similar big-ticket items or brands – eye catching offers. All the hype centres on a few massive discounts. They do not say anything about the prices of the other less eye-catching products you might pick up at the same time. Capturing consumers by Hi-Low price deals is a well-known device – some consumers reward themselves with further typically unwanted purchases as a reward after landing the big discount.

Your local politician and the CEO of your big local retailer are not your best buddies – they want your money or your vote – more importantly they do not want you to give your money or your vote to their competitor. Deep discounts are a formula used to increase store footfall, attracting people into your shop and not to your competitors. The games played by politicians and the retailers are designed to make you feel part of a big party – to feel wanted and cared for.

4. First in the queue – who gets the goodies?

But with 60 million of us in the UK – election or Black Friday – you will probably not get what you actually want – there will probably be more strident people ahead of you in the queue – either by right or might – they may beat you to what you thought you were going to get. Each major party has key pressure groups they respond to post election and promises made in the marketing hype are not always delivered. Just as limited offers sell out, the MPs can ‘sell out’ and U-turn as well, especially with small majorities/coalitions – as we have witnessed in the last few years.

Lastly but by no means least, the economy has a substantial debt problem, politicians have promised billions in new spending programmes some sensibly on infrastructure projects – however this has set off alarm bells among the economics community. Bluntly stated the UK cannot afford massive government expenditure hikes without also raising greater tax revenue or greatly limiting public services. Just like a consumer who overspends on Black Friday there could be many long-term negative impacts on the economy should debt increase too far. Likely candidates are higher inflation and higher unemployment and a run on the pound – remember the 1970s anyone? For the consumer, credit card debt can easily mount up, so be sensitive to what you personally can afford as consumer debt levels are at record levels.

So, what can you do?

Well, I’m not going to tell you who to vote for! I’m not going to tell you not to enjoy sales and discounts at the stores either – that’s your business. But consumers and voters need to be extremely careful and really think through their choices. By all means think about yourself and the potential new shiny thing in your life. But do you need it, can you afford it, are you being misled or misdirected and, perhaps more importantly, do you care about how your choices impact on those around you? Have you done your homework and really know what you are buying into?

This Blog post was written by Dr Jon Seaton, Reader in Business Economics and member of the Accounting & Finance and Economics discipline groups at the School of Business and Economics. Jon can be reached on j.s.seaton@lboro.ac.uk