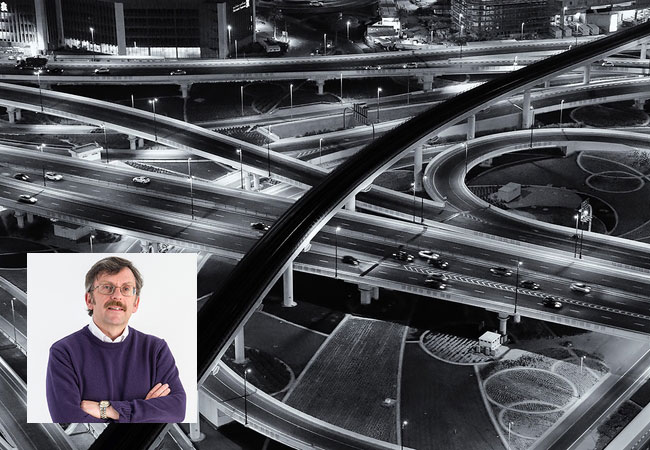 Almost all goods are transported by road. Food, clothes, cars, electronics whether imported via ship/air or home produced, they must eventually hit the road before their final destination – your home.

Our road network and transport hubs can be thought of as a vast machine of critical importance to trade and growth in the UK. Indeed our road infrastructure is one of the largest productive assets – the total road length in Great Britain is well over 246,000 miles.

With a machine like this a slight delay can cause severe cost hikes and knock-on effects throughout the economy. For example – a severe four-hour three-lane motorway closure can cost about £1,488,960. (Highways England). The inconvenience associated with the extra 178 hours lost from congestion cost the average UK driver £1317 in 2018. [See INRIX and Telegraph]

So, what’s gone wrong with our road transport machine?

In Economics we see the use of machines suffering from a number of key structural problems. The law of diminishing marginal productivity tells us that one car on one road can travel fast and safely as they are not encumbered by other road users. But each extra road user adds congestion for others so the benefits of road use per vehicle – the marginal output – declines as we add more traffic.

The obvious solution to a congested road is to scale up with dual carriageways and motorways. That is add another ‘machine’ by widening i.e.  two, three, four, or five lanes.

But road expansion can have loses for individuals and society. For example, to get the resources needed for a motorway either taxpayers pay more (reducing their planned consumption) or governments make cuts elsewhere (not building hospitals, funding Universities). Furthermore, by building and scaling up a busy road, we progressively remove alternative uses for the land – farming, housing, nature. All these lost opportunities have a price for the individual and community – the opportunity cost.

As we are well aware there are other costs associated with road transport. Greater flows of exhaust and other pollutants (CO2, noise, particulates etc), known as externalities, increase as private users of roads create costs for others that they may not fully pay for themselves.

A large and mature road network needs constant repair and maintenance as poor weather, environmental change, poor original construction and overuse take their toll. This problem of depreciation is paid for by both local councils and the highways agencies is costly (about £10 billion per annum, 2009 & 2012 similar), but road closures add costs to users in terms of journey times and diversions.

We have to balance the positives with negatives as scaling up is damaging but capping also limits growth opportunities.

The problem with a typical road journey

The fundamental problem with roads is the nature of a typical road journey – combined with the aforementioned economic issues yields simple and obvious solutions that are only now becoming viable.

Looking at the diagram above a typical road journey from A to B typically involves some local road use at low speed before and after the faster motorway. Local roads limit speeds from 20-60mph whilst motorways or dual carriageways are limited to 50-70mph depending on roadworks or other interventions. These speeds have not really altered in decades.

As you would expect a simple simulation (on Bing) shows significant regional and time of day differences in speed along our road network (starting from Loughborough). The lowest speed is of course the rush hour (8am), with average speeds in the North hitting just over 40mph, but it improves late into the evening – mostly. But travelling East and South was faster.

Travel to the ports or extreme compass points of mainland Britain are faster than for airports. Congestion around the cities could be the main culprit, but also the distances to the ports and extremes are greater, so more time is spent relatively on motorways.

For example, East Midlands airport, only 20 minutes away and mostly on non-motorway roads with 30-40mph speed limits, yields an average speed of 25mph.

For Glasgow Airport – a route which is on the motorway for a high proportion of the journey – 56mph was the average speed achieved at 11.30pm.

So, what’s the solution?

Unfortunately, in the long run we need to stop thinking about roads! They are two-dimensional. The dream would be to start thinking about A to B travel directly but in three dimensions.

It is no accident that Amazon is investing in drones, electric and autonomous vehicles and Elon Musk is also making tentative steps with the Boring Company and fully autonomous vehicles with potential for lower cost small diameter underground systems.

In the short term autonomous flying drones are heading our way especially if battery technology improves further. Currently they are viable for very short city flights, or from close to home to transport hub. Some reports put speeds at between 150 and 200mph. They need little infrastructure – and perhaps spell the end of the road for the road!

Dr Jon Seaton is a Reader in Business Economics and can be reached on J.S.Seaton@lboro.ac.uk.

Interested in studying economics at Loughborough? Find our more here.

Read our new issue of Inspire.