Volunteering at the Rio Olympic games

The whole entire Rio 2016 experience was indeed one of the most memorable experiences of my life. I was tremendously excited to be a part of the behind the scenes operations of the world biggest sporting event!

The journey to Rio in itself was fascinating as all the Olympic fervor and atmosphere had begun at the Abu Dhabi airport itself. You could see travelers wearing the jersey of their country, carrying its flag, or even stocking up on Olympic merchandise. I could also see some representatives of different National Olympic Committees and also meet the relatives of the athletes in the games. One could see the world going to Rio!

When I reached, I was welcomed into a warm homestay with a cup of steaming hot Brazilian coffee and a Pão de Queijo (freshly baked cheese bread). It was divine. I chose to stay with a family as I though that it would give me the best exposure to the local culture. They were indeed extremely welcoming and helpful. I lived with an Uruguayan flat mate who was an extremely jovial and fun guy.

The next day, I collected my Uniform and Accreditation and in the process met other staff members. I made some great friends there and learnt about my exact responsibilities and duties as an Event Services Assistant during the games. 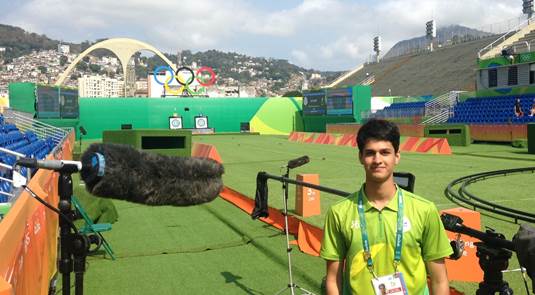 My first shift was at the Maracanã Stadium for the Opening Ceremony. It was just awesome! I worked with the venue office liaising the requirements of the numerous stakeholders of the Olympic games such as sponsor representatives, artist and athlete managers, the Olympic Family other contractors. Whilst I was behind the scenes for most of the bit, I could see the ceremony from the venue office and it was nothing but spectacular.

I also worked at the archery in the Sambodrómo. This iconic venue is also where the Rio Carnival is held every year. I helped production and sports presentation team. I took athletes to the media room and venue press center pre and post match. Moreover, I also worked in the Competition Management Office making athlete timetables. I coordinated with the sports logistics team to have athlete-training equipment delivered appropriately. I also contributed in finalizing with the spectator services layout of the venue in order to enhance the spectator experience.

I picked up some extra shifts at the Barra Olympic Park. I helped the Fan Engagement team design and set a sport experience unit for spectators at the Boxing arena. This allowed the spectators to try out a sport of their choice outside the venue with other spectators. This was a way of developing their interest in the sport. Moreover, I worked at Venue Services at the Hockey Centre at the Korea vs. Japan and India vs. Canada matches. Provided administrative support to the Competition and Training Areas. Supported pre- match meetings, in producing reports and minutes. Responsible for checking and supporting teams in different areas of the venue where they were working. 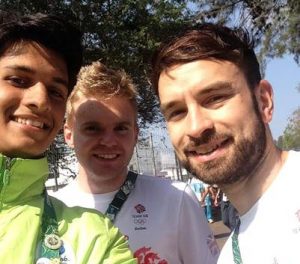 I worked at the badminton semi finals assisting with on field protocols, which included assisting athletes with their pre and post match requirements. On the day, I also had a chat with Team GB badminton bronze medalists, Marcus Ellis and Chris Langridge. Turned out, that Marcus also plays for Loughborough Sport in our university in the National badminton League! This was indeed a very interesting moment for all of us!

Finally, I was invited to a Live Radio show on the BBC Worldwide Service after I met the BBC team near the Olympic Park. We spoke about my role here, the competition events on during that evening and I made it a point to talk about the support provided by Loughborough University in making this happen! I was also interviewed by NDTV, a leading Indian news network!

After a hectic day, I spent the evening at Copacabana beach with a multicultural friend group where I had some amazing Brazilian spicy prawns and guava and banana cake.

Being an Indian, it was indeed awesome to have watched PV Sindhu’s badminton final! The atmosphere was just unbelievable! I worked in the venue communications office answering emails related to ticketing queries, venue queries, accessibility enquiries and assisted journalists with media protocols. In the evening worked in the same capacity at the Maracanã at the Sweden vs. Germany Women’s football gold medal match.

Maracanã for the Brazil vs Germany Men’s Football Final. Worked within the brand management team ensuring there was no unauthorized brand exposure, that no unofficial products were sold and that there were no irregular ticket transactions. Supported the production and distributions of materials. Monitored news related to the final reported on different media. 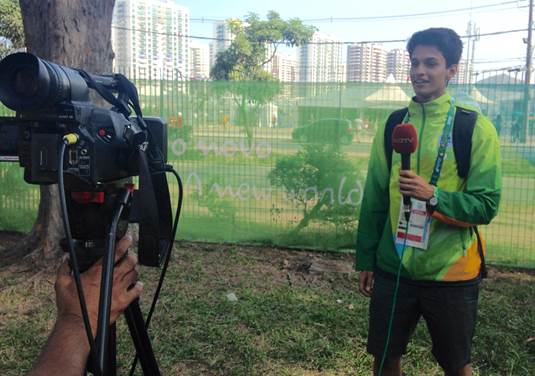 Within this hectic schedule, I had a couple of off days and I visited the iconic Christ the Redeemer statue; the Escadria Selaron in Lapa which is known to be the beautiful staircase in the world; took a cable car to the Sugarloaf and Urca rock which gave me some magnificent panoramic views of Rio. I also explored the local food of Rio which included Brazilian barbecue lunches. I spent my off evenings at Copacabana soaking in the relaxed atmosphere of Rio!

I was very heavily involved with the Coaching and Volunteering Academy at numerous events and also taking up the Event Coordinator role on the MyLifestyle Committee. As a result, this whole stint was very kindly supported and encouraged, both financially and otherwise by Loughborough Sport and the Coach and Volunteer Academy who have been incredible in shaping me professionally and have geared me to undertake a role in the competitive yet fascinating sport industry!