At the end of July, I was delighted to be able to visit the Archaeological Fieldschool at Bradgate Park.  Run by Leicester University, it offers students experience of a real piece of research: digging, recording and interpreting.  It’s an intensive few weeks, with seven hours digging all day – I was lucky to be able to spend some time with Dr Richard Thomas, the co-director of the Fieldschool.  He explained that a laser survey of the Park in 2014 revealed 240 earthworks, so there are plenty of possible sites to explore.  As well as giving the students a great experience, the annual digs allow visitors to the Park to see more of the historical significance of the site.  Showing people the significance of locations like this increases our understanding, and encourages us to appreciate and look after these fascinating places. 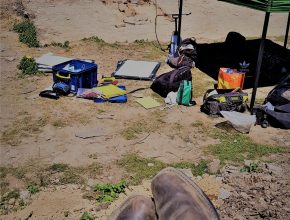 This year’s dig focussed on a building that faces the ruins of Bradgate House.  Evidence for the building came from 18th century drawings; it featured on Ordnance Survey maps until the mid-19th century, but nothing now remains.  Richard told me about what they’ve found: a stable block, housing up to 27 horses for Bradgate House.  They have recorded exterior walls and the post-holes that would have separated the stalls.   It was in operation in the 17th century, and seems to have been extended to look more impressive the visit of King William III in 1695: a coin from William’s reign has been found in the extension, dating the building to that era. If the King is visiting, it’s a good excuse to show off, after all.  The archaeologists have established that there was a hayloft on the second floor and space for grooms: their experience of the stables might have been different from that of the owners of Bradgate House and their royal visitor. There is a sun-dial, and evidence of the large and elegant porch that can be seen in an illustration from the 1700s.  With Richard’s explanations, it became easier to imagine the bustle of daily life and the activity in the stalls and tack-room.

At the end of the dig, the site is backfilled – saving it for future archaeologists who may have access to even more sophisticated equipment and techniques in future.  I was able to watch their work for a while, and wrote this poem:

work out the twists of

They are bent in prayer at the dust of a trench,

scraping out the living;

the limbs of an aristocratic landscape,

A loose wooden enclave surrounds the diggers – with legs bent,

they can’t jump out.

Yellow and blue plastic against the pale

dried earth, and the patches of dark activity.

Everything robbed out but foundations,

leaving a difference between the red brick and stone,

a difference between the slate that’s thrown away and the rocks left to record.

from their quarry to the stately house, then to village homes.

As much work to take apart as it took to build.

The archaeologists work on under endless sun,

Back-filling history on a Thursday.