Google Apps for Education allows HE and FE institutions to make use of Google Apps services for their staff and students. This includes services such as email, calendaring and file store.

At Loughborough University we’ve been investigating how to integrate some of the Google Apps for Education services into our local IT ecosystem to improve the student experience. What follows is a brief overview of two of these developments – one for Google Drive and another extending the use of Google Calendar.

We were asked to look at using Google Drive to provide additional file store for students. This would not only cut down on our file storage costs for students, but they would also be able to more easily access their files when off campus or using mobile devices. Additionally they could potentially share their files with 3rd parties (eg work placement employers, friends at other institutions, etc) which would be difficult to do with locally held file stores.

Google provide a web browser based user interface to this service and also a Windows file system plugin. We had hoped that the Windows plugin could be used on our lab PCs around campus to give students a seamless view of the Google Drive file store, but unfortunately it appeared to only use the Google credentials for the user that originally installed it. This was fine on staff machines with only one user, but our lab machines may have many people using them and are locked down to prevent students installing new software.

We therefore looked to the Google Drive Application Programming Interface (API) to see if there was a way we could work round this.  As well as providing multiple users on the same machine with access to the file store, we really wanted to avoid having to ask the user for their password again to access the Google Drive. Instead we intended to make use of the Active Directory log ins that they had already made on the lab PCs.

We decided the easiest way to support this was to use a Linux machine running Samba as a “bridge” between the Windows file sharing world and the Google Drive APIs.  Samba is a free, open source implementation of the Common Internet File System (CIFS), which is the underlying protocol that supports Windows file sharing.  As well as being open source, Samba also has the concept of Virtual File System (VFS) modules, which are extensions that allow developers to intercept CIFS operations to provide additional services.

After testing basic functionality via the pre built PHP client libraries, we started prototyping in Perl in order to work out how to generate the OAuth2 delegated authority JSON Web Token (JWT). OAuth2 allows a Google Apps service account to authenticate to Google’s servers and then act on behalf of one of our Google Apps users.  These prototype Perl scripts were designed to be “thrown away” – they merely allowed us to experiment rapidly in a comfortable development environment.

Once we had the Perl prototype authenticating successfully and issuing the RESTful Google Drive API calls, we then turned our attention to implementing a Samba VFS module in C. Whilst using the Samba version 4 distribution we were actually working with the Samba 3 part of the code, as much of the new Samba 4 code is concerned with Active Directory (AD) domain controller provision, and all we needed our bridge server to be was a fileserver bound into the campus AD.

This new VFS module would first take the username of the user making the CIFS connection and then look up their email address in the campus AD using LDAP.  Once the email address is returned it can then be used to create a JWT for passing to Google’s OAuth2 service to authenticate the delegated service account access to the user’s Google Drive account. A successful login returns a limited lifespan bearer access token which is then used with subsequent RESTful Google API calls to authenticate each transaction.

The rest of the Samba VFS module coding was concerned with mapping the CIFS operations to Google Drive operations.  This is quite difficult – CIFS and Google Drive not only have some underlying differences in the way that the file system structure is designed, that requires work arounds in the VFS module, but we also had to learn about the CIFS protocol itself.  CIFS has been developed over many years with additions made as new operating systems and services have been deployed, often with little or no documentation.

Eventually we managed to provide enough mappings for the following simple operations to work:

The result of our development is that we can now mount one (or even more) Google Drive file stores on a windows PC simply by doing a CIFS file sharing mount onto our “bridge” Linux server.  Performance is not stellar but is acceptable for many users – caching the files returned from Google on the file store of the bridge server helps a lot, especially as many people read lots of files but only edit a few in any one session. 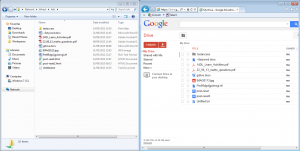 At the moment it is being tested by a number of staff on campus and will be rolled out to shared lab PCs in the Library shortly. One additional advantage of the Samba bridge is that it allows non-Windows machines to also mount Google Drive as a file store.  For example Linux machines can now mount Google Drive storage using this system, which is a platform that Google themselves do not yet support directly.

The student Google Apps users get access to Google’s excellent Calendar service. However there are other, pre-existing University calendars with information of interest to students held elsewhere. One example of this is the lecture, lab and tutorial timetabling system. We were asked if we could attempt to bring the timetable data into the Google Calendar system so that students would have their timetables available alongside their personal calendar entries.

There were a number of issues to solve here. We could have created an extra calendar for each student and injected their personal timetable into it, but this would have required many thousands of calendars to be created.  As lectures details often change during the term, we would also have many more events to be maintained. It would not simply be the case of creating the calendar events at the start of the year, term or semester as the calendars will have to be updated daily. 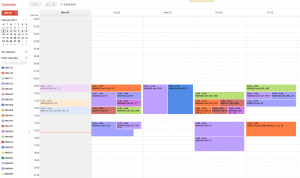 A view of the first year Mathematics undergraduate module timetables for one week in a Google Calendar.

Google Calendar API then allows us to share an individual module calendar from the “part user” to the student users that are taking that module.

Alongside the ability to share a full calendar of module lectures with our students, we are also able to inject events into their primary calendar directly, using the same core Perl modules to manage the OAuth2 delegation. We have begun to use this by creating “all day” events, listing a students library books due for return.

Thanks to APIs we have created to our library systems, we are able to deduce which students are required to return their books in seven days and can create events, with controlled notifications, in the students calendar prior to the books return date.

We are currently testing these systems, with a subset of the students, to gain feedback and aim to go live for all undergraduate and taught course students in Autumn Term 2014.