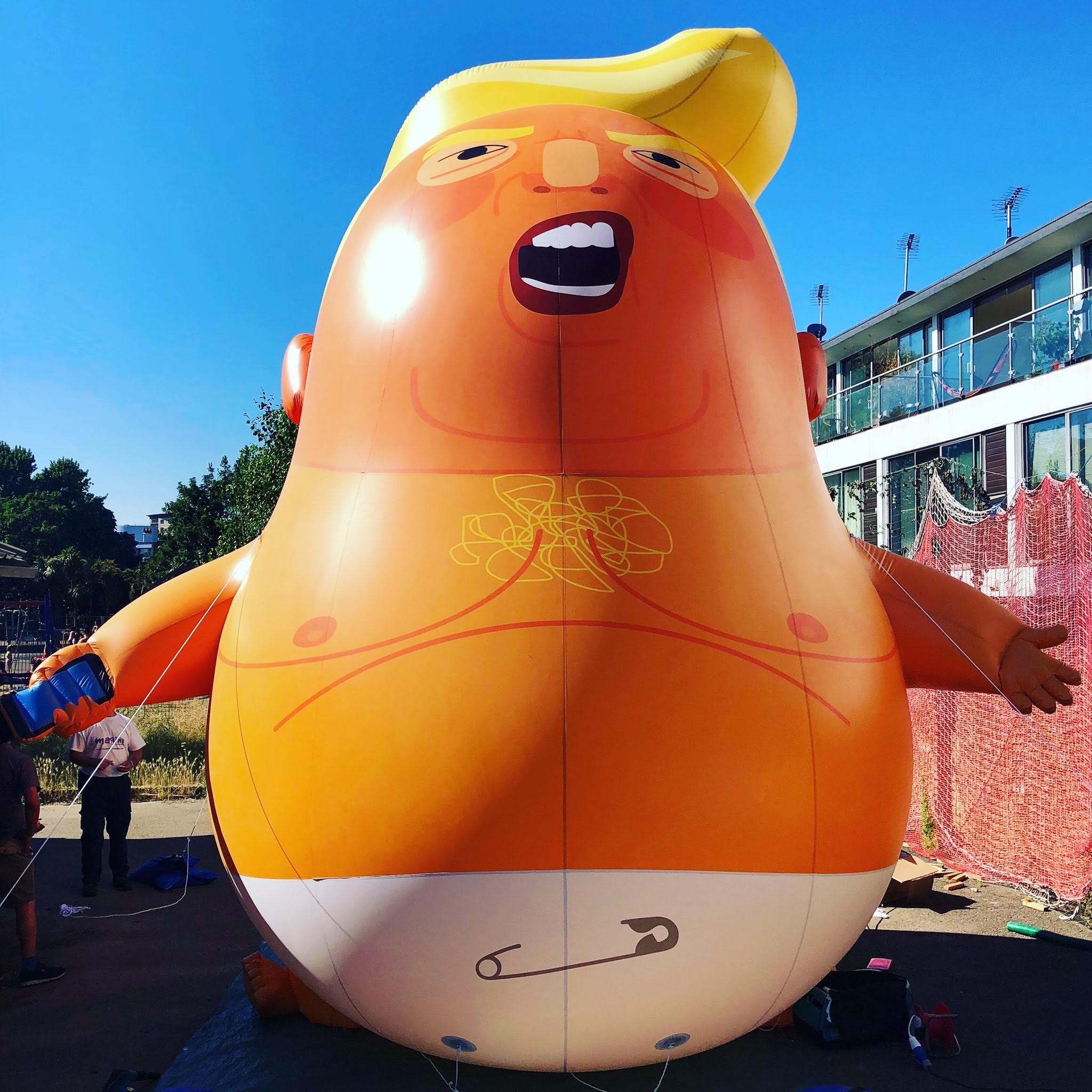 Trump baby balloon: why humour is such a powerful form of protest

An inflatable “baby” Donald Trump is expected to be the star attraction in London as protestors take to the streets to register their dissatisfaction with the visit of the US president on July 13. Protestors have much to motivate their mobilisation against Trump: from the controversial separation of families at the US-Mexican border, to his misogyny, nepotism, and travel ban. Tens of thousands are expected to attend a “Stop Trump” rally in what organisers have described as a “carnival of resistance”.

Humour, in the forms of chants, performances, satire, cartoons, theatre, jokes, memes and puns has a long tradition in protest movements. It acts as a vehicle to communicate ideas as well as to foster a sense of community – it can cut across linguistic barriers, and increase the resonance of the message.

All protests have a target, something or someone to galvanise others to action. The goal of the crowdfunded inflatable is to annoy the famously thin-skinned president. The six-metre tall balloon depicts Trump as a snarling baby in a nappy with tiny hands and moobs. Its purpose is not to change laws or policies, nor to influence his decisions. It is meant to mock and to undermine, suggesting the president is infantile, full of hot air, cartoonish and ridiculous.

Humour is empowering because it establishes those who are in on the joke and those who are the object of it. The balloon signifies an attempt to take back control and to undermine Trump. Whether he is aware of the balloon – and surely this media-obsessed president will be – is neither here nor there because mocking Trump is not just about annoying him. It fosters a sense of belonging between protestors and invites others to join.

The use of ridicule in this way confirms the public’s relative weakness vis-à-vis governments, multinational corporations and world leaders. But satire and humour foster a sense of solidarity in the face of adversity. For those of us exasperated by the actions of the Trump administration appearing in our daily news feed, mocking Trump is not just a sneer – it gives us a sense of power, at least for a moment.

Mocking strongman leaders is a cathartic exercise and one favoured by protestors around the world, particularly in authoritarian regimes. In response to Vladimir Putin’s repressive treatment of LGBTIQ people in Russia, including the notorious anti-gay propaganda law of 2013, a neon Warholesque image of Putin in full make-up replete with lipstick was widely shared across social media.

The image became so ubiquitous that Kremlin officials worried that the Russian president’s sexual orientation would be called into question and in 2017, the Russian justice ministry banned the image. However, Kremlin-approved images of the masculine Russian leader shirtless on horseback remain in circulation.

The aesthetics of protest

As I have argued in my work on the aesthetics of protest, protestors make aesthetic choices when communicating their ideas and this is bound up with the visual framing or staging of protests. Protest aesthetics are the visual and performative elements of protest, such as images, symbols, graffiti, art, humour, as well as the choreography of actions in public spaces. Protestors employ artistic forms which often retain a creative and handmade quality, frequently enlisting popular culture tropes such as the V for Vendetta mask of Guy Fawkes which has become emblematic of the Occupy and Anonymous protests.

While conventional forms of democracy, such as political party membership or voting, have declined around the world, political voices are now increasingly being expressed and performed through a variety of textual, visual and graphic forms. We’re witnessing an opening up of a public space for dissent, facilitated by protest movements and social media, which expands the range of voices which can be heard by those in positions of power. So humour, democratically conceived and expressed in ways such as a giant Trump balloon, allows our voice to be heard.