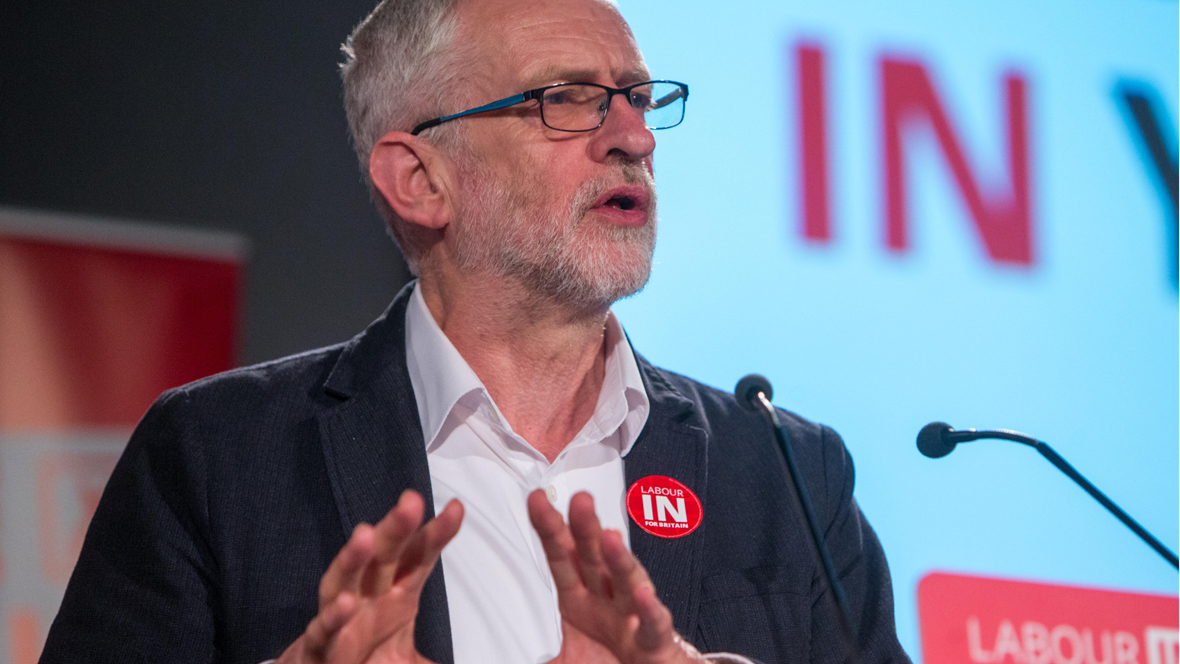 This is the fourth report by the Loughborough University Centre for Research in Communication and Culture (CRCC) on national news reporting of the 2016 EU Referendum.The results in this report are derived from detailed content analysis of news coverage of the EU Referendum produced on the weekdays (i.e. Monday to Friday inclusive) between 6 May and 15 June 2016 from the following news outlets:

This report has three sections, assessing:

Jeremy Corbyn and the Labour party gained significantly higher levels of media coverage over the last week.  Corbyn was the third most prominent politician over that period and Labour’s proportional presence rose from 10 to 22 percent.

Our analysis reveals some significant variations across news media sectors as to who has been reported and which campaign has been prioritised.

Newspapers supporting OUT carried more stories supporting the case for leaving the EU, gave greater prominence to OUT campaigners and gave them more direct quotation in their reporting. Exactly the same pattern is evident, in reverse, with pro-IN newspapers.

Television news coverage provides a stark comparison, coming close to parity in the news angles reported, the people included and the amount of quotation time allocated to each side.

Ddifferences in press and TV coverage of the Referendum campaign have not produced significant variations in the issue agenda. Across all media, this remains a very narrowly cast debate, with coverage of the campaign process, the economy and immigration accounting for around 2/3rds of coverage in TV news, pro-IN newspapers and pro-OUT newspapers.

Our week-on-week analysis of the relative prominence of coverage of the ‘economy’ to ‘immigration’ reveals that the former retained its position as the most frequently reported substantive issue. Having said this, ‘immigration’ remains a very significant subject in news coverage

This section examines which individuals, organisations and institutions received most media coverage. Table 1.1 identifies the 10 most prominent politicians over the most recent sampleperiod, comparing their ranking with the preceding week.

Figure 1.1 compares the weekly prominence of the main political parties as the campaign has progressed. 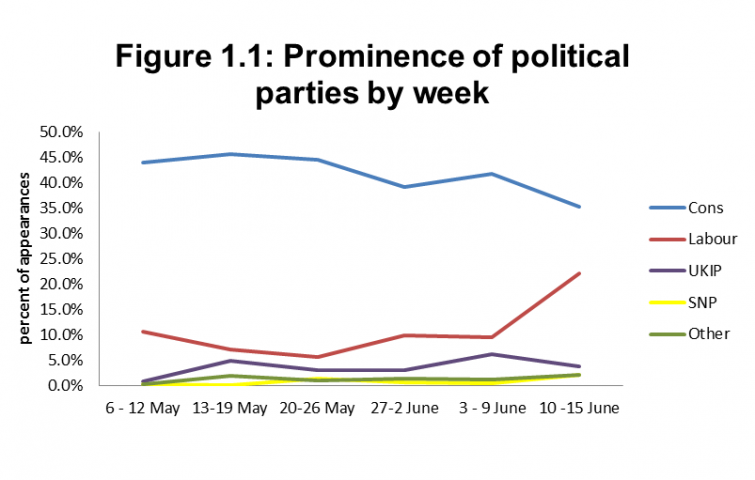 Table 1.2 provides an aggregated top 10 for the entire sample period.

For the first time in the campaign since polling day Labour politicians have entered the top five in terms of media appearances by individual campaigners (Table 1.1).  Jeremy Corbyn finally emerges as one of the most prominent campaigners in the debate, reflecting the promotion of Labour spokespeople as representatives of the IN cause.  As a whole, the party garnered significantly higher levels of coverage. The Conservative party is still reported with greater frequency than Labour, but the coverage gap has closed markedly over recent days. Labour’s recent emergence suggests the media coverage is less concentrated within the confines of the Conservative party, but this broadening-out has not worked to the benefit of other parties. UKIP’s profile has reduced and the Liberal Democrats, Greens, SNP and others have been deemed to have little to say of consequence.

For this week, David Cameron and George Osborne continue to be among the individuals most frequently reported in the news alongside their fellow Conservative Boris Johnson.  Significantly the ex-Mayor of London and OUT representative once again becomes the only person to have dislodged Cameron as the highest profile campaigner, repeating a feat he first achieved a month ago.  Employment Minister Priti Patel, another Conservative OUT campaigner, achieves her best rank yet and one that establishes her as the most prominent woman to have been reported during the debate.  Energy Secretary and Conservative IN spokesperson Amber Rudd enters the top ten for the first time following her high profile intervention during a televised debate in which she challenged Boris Johnson’s credibility.

Iain Duncan-Smith and Michael Gove confirm their positions as keyConservative spokespeople on behalf of the OUT campaign.  Although he drops down from third to seventh place this week, Nigel Farage nonetheless consolidates his unique statusas the only representative of either side to not come from the two major parties.

Looking at the entire sample distribution, a relatively small number of politicians have emerged to dominate the debate in terms of the frequency of their media appearances (Table 1.2).  But it is also possible to detect from those individuals present in the top ten some discernible media interest in another forthcoming vote: the one to decide who will be the next Prime Minister.  In news terms both sides in the Referendum have effectively been led by Conservatives in the guise of the present incumbent of No.10 Downing Street and a number of others, most obviously Boris Johnson, who reportedly covet his job.

This section is concerned with the issue of ‘directional balance’ in coverage – i.e. the extent to which coverage within news media tends to incline towards arguments supporting an IN or OUTposition.In our third report we identified where individual newspapers have positioned themselves in this debate and this enables us to differentiate between pro-IN and pro-OUT titles[1].

Figure 2.1 compares the volume of items that mainly or solely favoured the IN and OUT campaigns across different media sectors. This figure is calculated by subtracting the number of items favouring IN from the number favouring OUT. 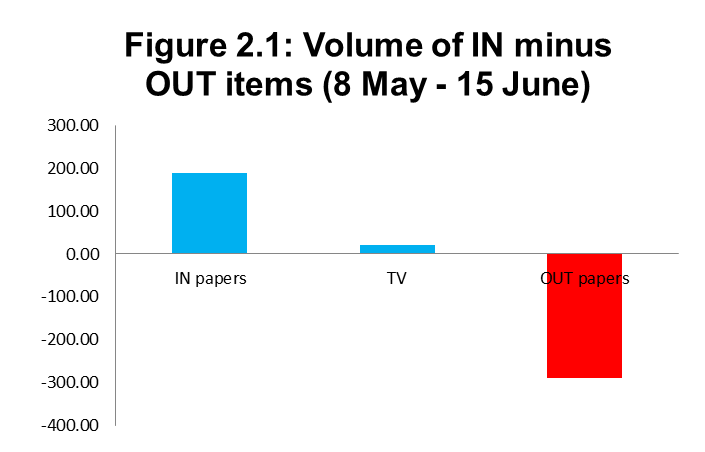 Figure 2.2 compares the news presence of proponents and opponents to the UK’s membership of the EU (measured by the frequency of their appearance in coverage). 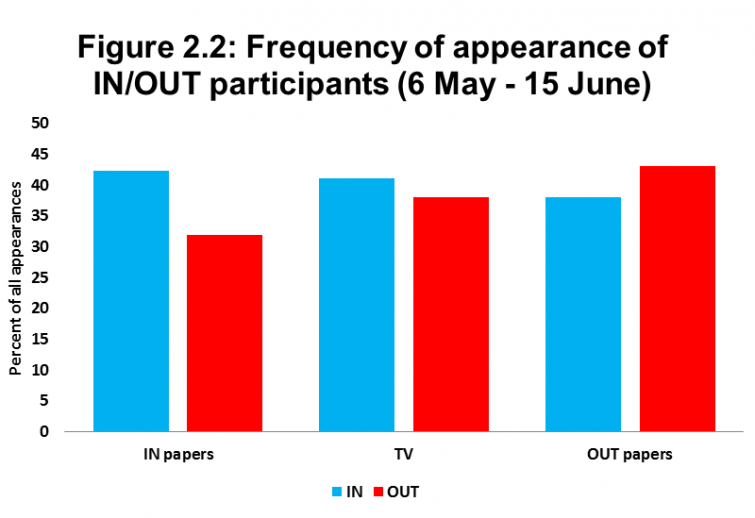 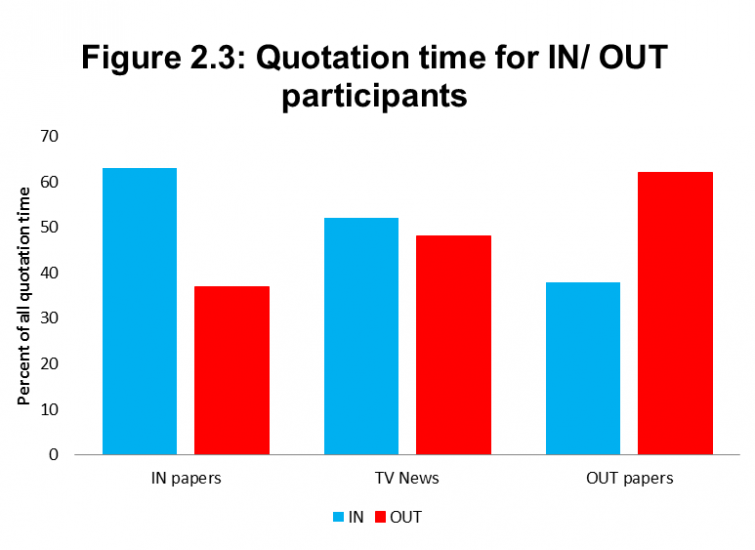 Figure 2.3: Quotation time for IN/ OUT participants

These figures demonstrate how partisan positioning in the press has manifested itself in (1) which news angles are prioritised, (2) the relative prominence of the competing campaigns, and (3) the extent to which they are directly quoted. There is a consistent patterning throughout. Pro IN papers have given more space to pro-IN advocates and arguments, just as pro-OUT papers give more space to their pro-OUT equivalents.

The results show that the biggest difference has been in the amount of direct quotation permitted to advocates of the competing positions. The analysis also demonstrates how television news coverage differs from partisan press coverage. The three measures show that TV news has orientated slightly more towards the IN campaign, but these differences are negligible compared with those found for the pro-IN and pro-OUT press.

This section examines the issue agenda in the reporting of the referendum during the sample period. What issues have dominated coverage so far, and what have failed to attract much attention? And has there been any shift in the media agenda on a week by week basis?

Figure 3.1 compares the week-on-week prominence of coverage of ‘Economy’ and ‘Immigration’ for all news organisations. 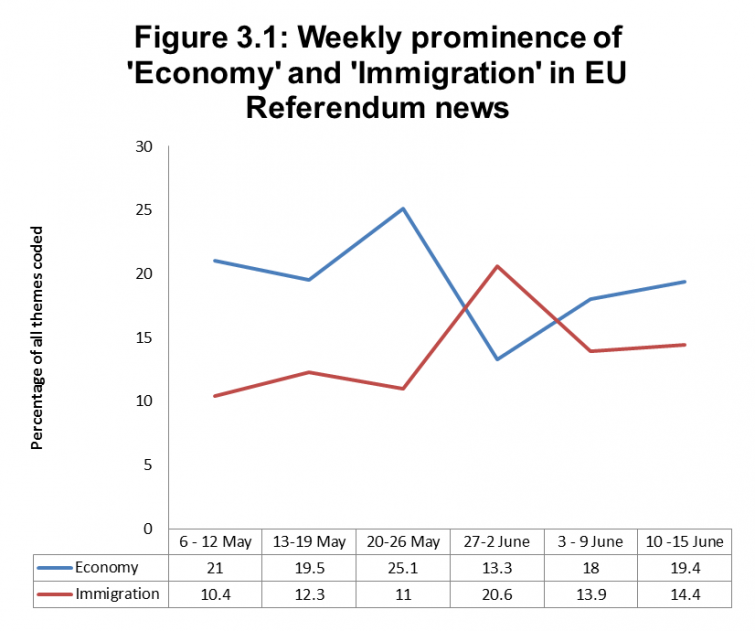 [1] Pro IN: Financial Times, Guardian, Daily Mirror, the I, The Times. Pro OUT: Daily Express, Daily Mail, the Sun, the Star, Daily Telegraph.