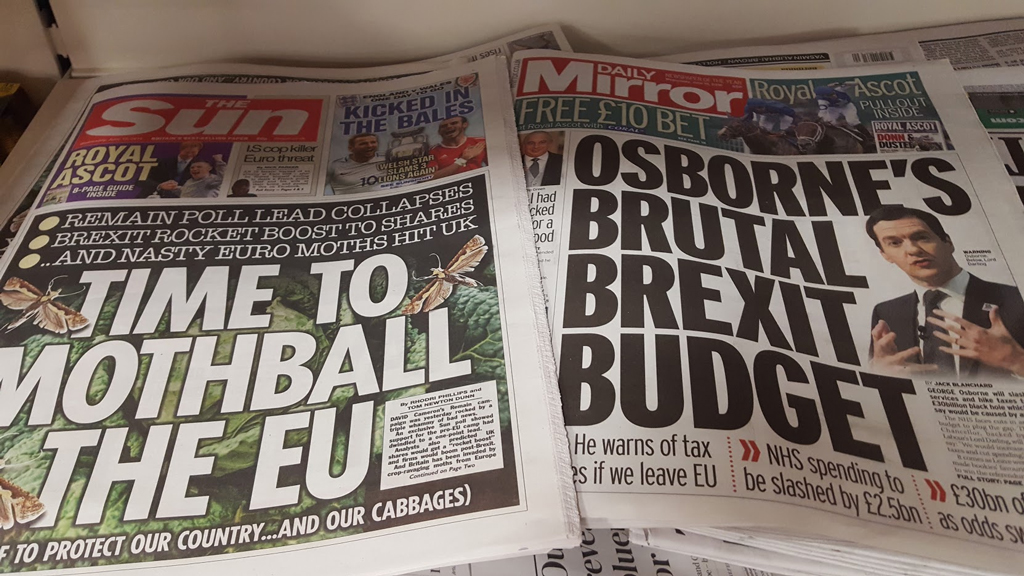 82% circulation advantage in favour of Brexit as The Sun declares

On the day The Sun officially came out in favour of Brexit, research from Loughborough University reveals which side of the fence the national press are really sitting on.

In depth analysis of 1127 media cuttings since 6 May suggests that whilst newspaper coverage of Leave or Remain is broadly balanced, a weighted evaluation that takes circulation and strength of partisanship into consideration shows 82% circulation advantage in favour of Brexit

Experts in the University’s Centre for Research in Communications and Culture have been analysing press and broadcast coverage of the EU Referendum since 6 May 2016.

Their latest report lifts the lid on press partisanship and finds: 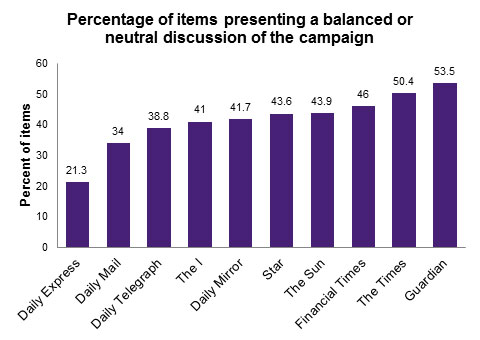 When calculating volume of Remain / Leave and combining with available news space, The FT is the most pro-Remain newspaper and the Daily Express the most pro-Leave.

This table ranks national press for their partisanship based on the volume and average amount of coverage supporting Leave or Remain (where 1 is the most pro-Remain and 10 is the most supportive of Leave). 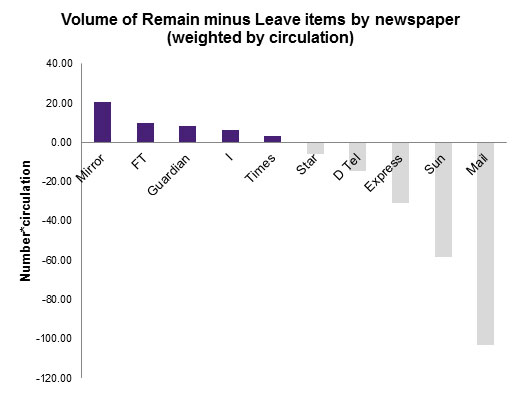 Volume of Remain minus Leave items by newspaper (weighted by circulation)

“Our research shows The Sun had been hedging its bets on Brexit. Not any more. The paper’s backing of Brexit is no surprise, but the strength of its editorial statement today is.

“Our analysis reveals five national newspapers are backing REMAIN and five, including The Sun, are backing LEAVE. But if you factor in the strength of papers’ endorsements and the size of their circulation, LEAVE has an 82% to 18% advantage over REMAIN.”

The following news outlets (weekdays only) were analysed for the report:

Loughborough University is equipped with a live in-house broadcast unit via the Globelynx network. To arrange an interview with one of our experts please contact the press office on 01509 223491. Bookings can be made online via www.globelynx.com

Loughborough is one of the country’s leading universities, with an international reputation for research that matters, excellence in teaching, strong links with industry, and unrivalled achievement in sport and its underpinning academic disciplines.

It has been awarded five stars in the independent QS Stars university rating scheme, putting it among the best universities in the world, and was named the best in the country for its student experience in the 2016 THE Student Experience Survey. Loughborough was ranked 4th in the Guardian University League Table 2017 and 7th in The UK Complete University Guide 2017 and was also named University of the Year in the In the What Uni Student Choice Awards 2015.

Loughborough is consistently ranked in the top twenty of UK universities in the Times Higher Education’s ‘table of tables’ and is in the top 10 in England for research intensity. In recognition of its contribution to the sector, Loughborough has been awarded seven Queen’s Anniversary Prizes.

In September 2015 the University opened an additional academic campus in London’s new innovation quarter. Loughborough University London, based on the Queen Elizabeth Olympic Park, offers postgraduate and executive-level education, as well as research and enterprise opportunities.