I note with great interest that Dublin Business School has recently had an article accepted in the New Review of Academic Librarianship, regarding their faculties’ perceptions of LORLS.

In the article Marie O’Neill and Lara Musto discuss a survey of faculty staff at DBS which reveals that their awareness of the system is greatly impacted by the amount of time they spend teaching. They also show that promoting appropriate resources to students and improving communication between faculty and library staff are seen as major advantages of having a RLMS. I particularly liked the following quote that came out of one of their focus groups:

“One of the challenges nowadays is recognising that students are reading more than books and articles. They are reading the review section of IMDb for example. Reading lists have to change and our perception of reading lists.”

One of the other outputs of the article was a process implementation chart, which was created to inform other institutions how they might best implement LORLS. This chart is reproduced below with the kind permission of the authors. 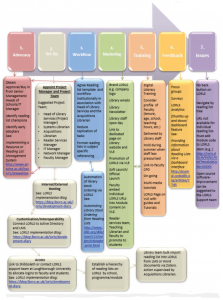 The article concludes with a strong desire from DBS faculty for greater integration with their Moodle VLE system. This is something that we are actively investigating and we have begun to pilot a Moodle plug-in at Loughborough, which we hope to include in a future release of the LORLS software.

by Jon Knight in LORLS

We’ve been thinking recently about how to make it easier for people to try out the LORLS code. This includes ourselves – we sometimes want to spin up a new instance of LORLS for testing some feature or helping another site debug their installation. Normally that would mean doing an operating system, Perl module and then LORLS installation on a new machine (physical or virtual) before it could be used.

With the spread of virtual machine (VM) infrastructure, and the fact that many Universities now use VMs widely, we thought it might be worth making a “LORLS in a box” VM appliance image that people could grab and then use for testing, demos or as the basis of their own installation. The VM image would have LORLS pre-installed along with all the basic Perl modules required in place, and the test data that we use in our local sandbox instance.

To that end, here’s a first cut of a LORLS in a box VM image. This is an OVA virtual machine image (both the VM and the disc image).  Be warned that its quite large (over 900MB!) as it has a full operating system disc image included – you might want to have a cup of tea and biscuit handy whilst it downloads. The image was built using the Virtual Box OSE VM platform and is based on a CentOS 6 Linux base, and it should be able to be imported into other VM infrastructures such as VMware.

Once you’ve imported the LORLs-in-a-box VM into your VM infrastructure and started it up, you’ll eventually be presented with a login on the console.  Your VM system may complain about not having a matching ethernet controller the first time you run the VM image – you can ignore this error as the LORLS VM image should work round it when it boots up.  Once booted, the console should also show you the IP address that the VM has picked up and the URL that you can use to get to the CLUMP web front end.  By default the networking in the VM is using a bridged interface that picks up an IPv4 address via DHCP.  This is fine for testing and development, though if you’re using this image as the basis of a production system you’ll probably want to nip in and change this to a static IP address.

To login to the system there’s a “lorls” user with the password “lorls4you” (both without the quotes).  This user can then act as the superuser by using sudo.  The MySQL server on the machine has a root user password of “LUMPyStuff!” (again quoteless) should you wish to go in and tinker with the database directly.  You probably want to change all these passwords (and Linux root password) as soon as you can as everyone now knows them!  You’ll also most probably want to edit /usr/local/LUMP/LUMP.pm file to point at your own site’s Z39.50 server, etc.  There are a couple of demo LORLS web users hard coded into this demo system – user aker (password “demic”) is an academic that owns a reading list, and user “libby” (password “rarian”) is a library staff user.

by Jon Knight in LUMP

We’re getting to the point with LUMP and CLUMP where Jason and I are thinking about installers.  If we were just going to use the code at Loughborough this would be a moot point – we’d just copy the various directories around and tweak under the hood to get the thing to work as we want, just as we have done during development.

However its not going to just be us that use it (or at least hopefully it won’t be!) so we need to think of a nice way for people to install it.  The previous versions of LORLS have a Perl command line script that I wrote years ago that asks lots of questions and then does its funky thang.  It works, but it could be friendlier, especially for the newbie admins.  I’ve also seen a number of PHP based packages that allow you to do most of the installation via a web browser which is rather nice for the new admins, so I thought, “Hey, why not make an installer CGI script that knows very little about the system other than there is Perl there, a MySQL database server is running, the CGI.pm module (which has been part of the Perl distribution since 5.4 so should be there already on most machines installed in the 21st century) and is an executable CGI script?”  Why not indeed…

Obviously the prospective LUMP admin needs to install (or have installed for him) Perl, MySQL and a webserver configured to execute CGI scripts in the directory that we tell them to unpack LUMP into, but once that’s done surely we can then check to make sure that all the other modules are present, install them if they aren’t, set up the MySQL database ready for LUMP to use and then configure all the LUMP scripts so that they are ready to go, all with a nice point and drool web interface?

Checking if a Perl module is available is relatively easy, thanks to the eval { } function in Perl.  For example, say we want to check if Data::Dumper is installed.  That can be done using some code such as:

However things start to get “interesting” if the module isn’t installed.  I thought this would be easy, as the Comprehensive Perl Archive Network (CPAN) has a nice module that I’ve used for years to interactively install and update Perl modules with – things like:

in your CGI script, eventually you’ll get a result in the web browser of a load of unformated raw text from this command interspersed with your active HTML.  The $result variable on the other hand will stay completely empty, with no indication as to whether the installation has worked or not.   Pants – not what we want here.

The long and short of it is, to get round this “feature” in CPAN::Shell it seems that you have to do a bit of fork() action.  In other words folk off a child process to run the CPAN::Shell method in and then, back in the parent, capture its STDOUT stream into a variable which can then be scanned with a regexp or two looking for signs of success in the output text.  Not terribly clean but it works.

There’s another “gotcha” as well: the web server is unlikely to be running as root (or at least it shouldn’t be!) and so the CGI script can’t install Perl modules into the system library directories.  This is a more minor pain: you can tell CPAN::Shell that it should do a local installation to a place that the user executing it can write to.  So that’s another requirement for running this CGI script: create a directory that’s readable and writable by the user running the web server (usually called something like apache or http) but which isn’t part of the web server document root.  In other words, if the web server document root is /var/www/html, we might want to put this LUMP specific CPAN directory tree in /var/ww/LUMPCPAN where it can’t be seen by web browsers.  You have to hack up a MyConfig.pm to put in this directory and then point @INC and $ENV{‘PERL5LIBS’} towards it, but that can be done automagically by the CGI installer script once the directory exists.

Now some readers (we do have readers, right?) might be wondering why I don’t use one of the fancy pants CPAN modules such local::libs or Module::Install to do this rather than tackling CPAN::Shell head on.  Well its a chicken and egg problem really: I wanted to have the minimum requirements for the installer script to run and, if I’d have asked the user to install a load of libraries and modules to make using CPAN easier I might as well have just given them a list of modules to install.  Which actually I have done anyway, just in case they want to install them system wide and/or not trut my installer script to get them right.  But nevertheless I’d like to give the newbies (and also folk who have sluggish server admins if they don’t run their own boxes) the option of installing via the CGI installer script.  More work for me, but hopefully less for them.

So, its a bit of kludge at the moment but it seems to be the way to go unless anyone else can come up with a better scheme.  Once I’m happy it can get the required modules in place, my next trick will be to ask for database server details (database name, username, password, server, port) and then check if the database already exists, or create a fresh one.  In the former case I’m also planning on checking the schema in the database against the one in this LUMP distribution and then offer to update it if needs be, and allow fresh databases to either be empty, have some simple test data in them or copy data from another database.  Hopefully I can also bolt the importer from older LORLS versions in here so that there’s no command line interaction required at all.  With a bit of luck all of those should be alot less hassle than CPAN::Shell has proved to be.