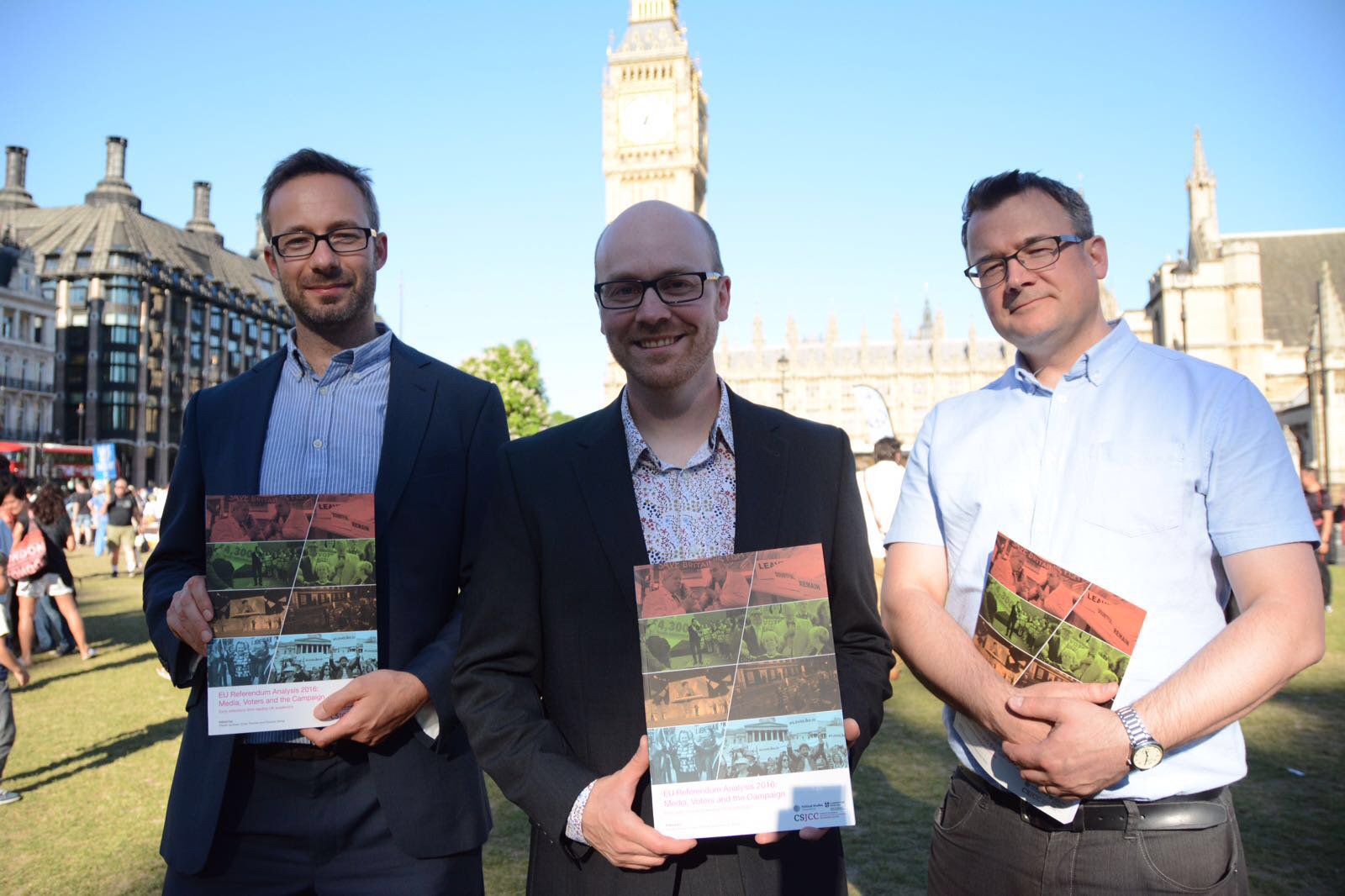 An EU Referendum analysis and opinion book featuring contributions from Loughborough University academics has been officially launched at Westminster.

The book titled EU Referendum Analysis 2016: Media,Voters and the Campaign covers topics such as the language of prejudice, EU Referendum media coverage and the rhetoric of the EU Referendum campaign. It features comment and opinion from 100 academics from a number of institutions – sharing views on the Leave and Remain camps as well as the final Brexit outcome.

The book, which was published just 10 days after the EU Referendum, was edited by Loughborough University’s Professor of Political Communication Dominic Wring, alongside Dr Dan Jackson and Dr Einar Thorsen from Bournemouth University. It has also been supported by the Political Studies Association.

Among the 80 chapters in the book, one chapter is focused on how the news media covered the Referendum – this is the result of media analysis research by Loughborough University’sCentre for Research in Communication and Culture. The research team audited national news coverage of the Referendum between 6 May and 22 June.

Hosted in Portcullis House in Parliament Square, the launch event was attended by MPs, MEPs, Lords and prominent academics, who all engaged in healthy debate about the outcomes of the Referendum and lessons that can be learned for the future.

Professor Wring said: “It’s a great moment to formally launch the report at Westminster and so soon after the Referendum, while it is still fresh in peoples’ minds. There is actually a lot of evidence in this book that pulls together some of the facts post-Brexit for people to distil and think over.”

Dr Einar Thorsen, Principal Academic in Journalism and Communication at Bournemouth University, said: “We always felt that there was a bit of a gap between all the fantastic research that happens in academia and politicians, so we were looking for way to get all that expertise out there very quickly.

“The idea is that it is early reflections from academics and experts in media and politics in the UK. This includes early findings and a critique of the Referendum campaign in terms of communications and media coverage.”

Dr Dan Jackson, Principal Lecturer in Media and Communications at Bournemouth University, added: “There are eight sections, ranging from parties, social media, journalism, political communication, and news and politics, so all of the key moments from the campaign are reflected upon.”

The book is available to read for free in PDF form here.

Loughborough University is equipped with a live in-house broadcast unit via the Globelynx network. To arrange an interview with one of our experts please contact the press office on 01509 223491. Bookings can be made online via www.globelynx.com

Loughborough is one of the country’s leading universities, with an international reputation for research that matters, excellence in teaching, strong links with industry, and unrivalled achievement in sport and its underpinning academic disciplines.

It has been awarded five stars in the independent QS Stars university rating scheme, putting it among the best universities in the world, and was named the best in the country for its student experience in the 2016 THE Student Experience Survey. Loughborough was ranked 4th in theGuardian University League Table 2017 and 7th in The UK Complete University Guide 2017 and was also named University of the Year in the In the What Uni Student Choice Awards 2015.

Loughborough is consistently ranked in the top twenty of UK universities in the Times Higher Education’s ‘table of tables’ and is in the top 10 in England for research intensity. In recognition of its contribution to the sector, Loughborough has been awarded seven Queen’s Anniversary Prizes.

In September 2015 the University opened an additional academic campus in London’s new innovation quarter. Loughborough University London, based on the Queen Elizabeth Olympic Park, offers postgraduate and executive-level education, as well as research and enterprise opportunities.