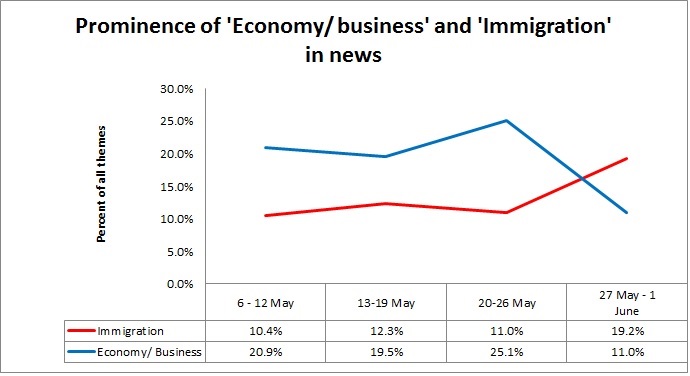 In our second report on news coverage of the EU referendum published on Monday we noted that ‘immigration’ had become increasingly more prominent in news coverage over the recent period. We also showed that coverage of economic and business issues had retained news value for the same period.

Further week-by-week analysis of our finding shows there has been greater volatility in the media agenda than our original report conveyed. For the first three weeks of our sample, the implications of the vote for the economy and business was the biggest story in town. Last week, its prominence plummeted, and ‘immigration’ surged to the fore.

Whether this represents a sustained or momentary shift in the news agenda remains to be seen. But there is no denying the scale and swiftness of this recent change in news priorities. The political implications of this are clear, with the ‘Leave’ campaign seeking to focus public debate on ‘Immigration’, and the ‘Remain’ campaign wanting to retain attention on the economic consequences of the referendum decision.