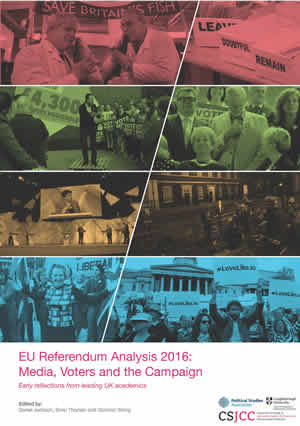 Featuring 80 contributions from leading UK academics, EU Referendum Analysis 2016: Media, Voters and the Campaign captures the immediate thoughts and early research insights on the 2016 Referendum on UK Membership of the European Union from the cutting edge of media and politics research.

Published 10 days after the election, these contributions are short and accessible. Authors provide authoritative analysis of the campaign, including research findings or new theoretical insights; to bring readers original ways of understanding the referendum and its consequences. Contributions also bring a rich range of disciplinary influences, from political science to fan studies, journalism studies to advertising.

We hope this makes for a vibrant and engaging read.

We are hosting an invitation only launch event in Westminster (18 July) and an open event on Brexit in Leicester (IAMCR – 27 July).