The latest report by Loughborough University finds TV broadcasters are providing a more balanced view in their reporting of the EU Referendum debate compared to the press.

The research team found that the partisanship of the press significantly affects who they report and who they quote, whereas broadcast media strive to offer more parity in their reporting. 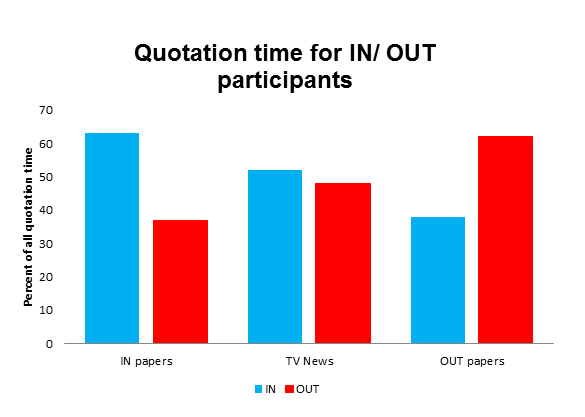 Quotation time for IN/ OUT participants

However, when it comes to what issues around the referendum are covered, both broadcast and the press have focussed on immigration and the economy.

The other key finding from the new report is that Labour has finally joined the debate in earnest, with the party and its representatives gaining 22% of media appearances compared to 10% the week before*. 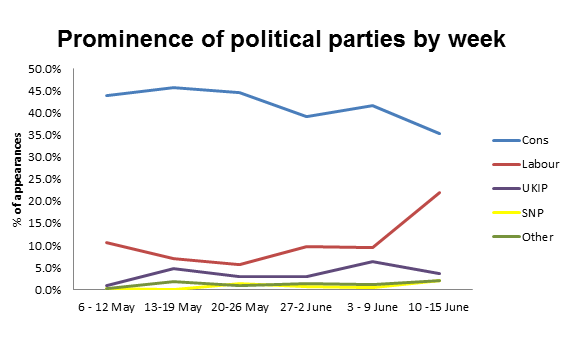 Prominence of political parties by week

For the first time Jeremy Corbyn has entered the top five of the most frequently reported individuals, coming third behind Boris Johnson and David Cameron. Last week he was in seventh place.

“The findings from our latest report demonstrate how partisan positioning in the press has manifested itself in three significant ways: which news angles are prioritised; the relative prominence of the competing campaigns; and the extent to which they are directly quoted. Pro-IN papers have given more space to pro-IN advocates and arguments, just as pro-OUT papers give more space to their pro-OUT equivalents.

“But the analysis also demonstrates how television news coverage differs from partisan press coverage. The three measures show that TV news has orientated slightly more towards the IN campaign, but these differences are negligible compared with those found for the pro-IN and pro-OUT press.”

The full report can be read here. Further information about the analysis can be found here.