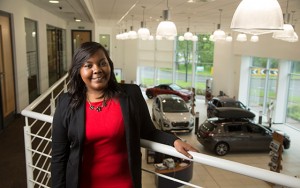 After a stint on the sales floor of the flagship Peugeot dealer Robins & Day in Coventy, Nicole set off for 24-hours in Gratz, Austria, for the international press launch of the Peugeot 208.

Nicole worked with Peugeot’s PR team to test drive the hatchback and to get a taste, first-hand, of how the company positions its products to journalists.

Next-stop for Nicole was a week at Peugeot’s design studio in Paris, and an opportunity for her to further develop her skill as a designer. “I created concepts for a superyacht, and found that designing an interior space was a nice contrast from car cabins because it lets you use more materials that aren’t suitable for automotive design.”

“Peugeot gave me a really varied experience within all areas of the industry and I became completely immersed in the automotive world,” Nicole explains.

We loaded Nicole with an action cam so she could capture some footage of her european adventures, you can watch the video here.

Nicole’s third placement is with Toyota, where she worked on marketing projects for the Toyota Mirai, the world’s first production hydrogen car.

If you’d like to win an internship at Honda, Jaguar Land Rover, McLaren, Peugeot, Skoda and Toyota, plus £9000, submit an original idea or innovation that would improve the UK automotive business in one of four categories – mobility, connectivity, sustainability or customer experience.

invstr are looking for motivated students to promote invstr at your campus and help spread the word!

Fill in your details below, to join the invstr Campus Ambassador Competition and you will send you a Unique Promo Code to start recruiting users with, as soon as the competition goes live!

The top 5 students from each academic institution who get the most amount of people to register in the app, whilst quoting their Unique Promo Code, will be invited to attend a day-long Workshop & Training session and will have the chance to become a Campus Brand Ambassadors!

There is also an internship reserved for the student who recruits the most amount of users overall during the competition. 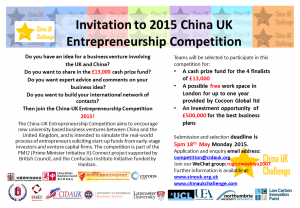 Do you have a creative idea for a business venture involving the UK and China?

Do you wish to build your international network of contacts?

Do you expect to receive professional suggestions on your business plan?

The competition is open to all university teams both in the UK and China.

Teams will be selected to participate in the final competition for winning: £13,000 cash prizes.

An investment opportunity of £500,000 for the best business plan!

A possible free work space in London for up to one year provided by Cocoon Global Ltd!

END_OF_DOCUMENT_TOKEN_TO_BE_REPLACED

Word Experience is back and we’re ready for your applications.
Here are some details about how you can get involved.

The world’s best (and most humble) language consultancy is running a two-day workshop on 26th and 27th March 2015. We’re looking for 20 undergraduates who love writing to come and get inspired to write for a living. And if you’re really good, we might ask you to be one of our two paid apprentices.

We’ll show you how you can make a career out of writing for business. There’ll be plenty of writing exercises, linguistic brainstorms and home-made pecha kuchas* to get your teeth into.

(*Google has the answer.)

You already write for your course

Maybe you study English, journalism or creative writing. Or maybe you just write a lot of essays.

You write in your spare time too

You might write for your student paper, a blog, or fiction. It doesn’t matter as long as you write.

You’re a bit of a word geek

You have a tendency to get excited or properly riled up by all kinds of writing. From tube ads to tubes of toothpaste, Booker Prize winners to Charlie Brooker.

Send us 300 words telling us why we should pick you (and a way for us to get in touch with you) to pickme@thewriter.com. Make sure ‘Word Experience’ and your name are in your subject line. And get it to us by 1st March 2015.

The TARGETjobs Undergraduate of the Year Awards 2015

There are 10 Awards up for grabs to identify the top undergraduates in Law; 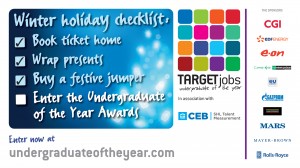 Find out more at and enter at: www.undergraduateoftheyear.com

A video for the competition can be accessed here

There are 10 Awards up for grabs to identify the top undergraduates in IT and Computer Science; Management; Law; Mathematics, Economics and Finance; Engineering; Construction, Engineering and Design; Low Carbon Energy plus three special awards: the ‘Future Business Leader’ open to students from any discipline and the Female Undergraduate of the Year open to the very best female undergraduates and the Languages Undergraduate of the year open to multilingual students.

The rewards are great: winners’ prizes include exclusive internships, lunches with directors and trips to the USA, South America, the Far East and continental Europe and the final ten students in each Award will be invited to the Undergraduate of the Year Awards in Canary Wharf London on 24 April, 2015 where the winners will be announced by the events host, Fiona Bruce.

If you make the final 10, not only will you be very close to a fantastic prize, you will have proved yourself to be amongst the best and most employable students in the country.

Find out more and enter: www.undergraduateoftheyearawards.co.uk

Students are invited to submit their entries before the deadline of 12th December 2014. 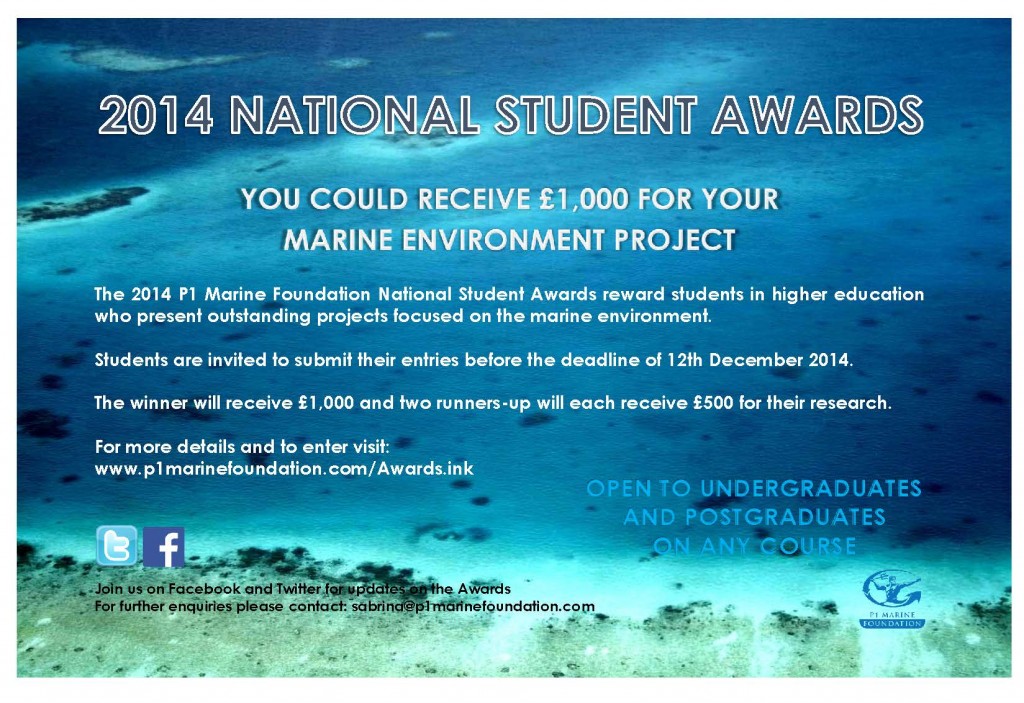 We are happy to announce the official launch of the 2014 HOLT Valuation Challenge offering you a chance to interview for paid internships and CO-OPs starting from June 2015! The Challenge is evaluated entirely on your performance and open to Bachelor, Master, MBA or PHD students from any university.

Compete for a highly coveted paid position with Credit Suisse HOLT and their affiliates.

Gain exclusive access to a leading valuation tool for the duration of your studies.

Get ahead in the recruitment market place by sharpening your company awareness and developing your integrated finance skills.

Become an active member of the ever-growing HOLT and
Project Firefly communities.

OneStart: Your chance to win £100k to realise your biotech business idea

Do you have an idea to solve a critical problem healthcare? Or do you have the scientific or business know-how to help someone else develop their idea?

The Oxbridge Biotech Roundtable (OBR) and SR One, the venture capital arm of GlaxoSmithKline, have teamed up again for the OneStart competition – the largest biotech startup accelerator programme in the world – to offer young innovators from all disciplines the chance to win £100k with free lab space at Stevenage Bioscience Catalyst near London, and ongoing legal and business advice from our sponsors to transform their ideas into a successful business.

Applications are now open until 1st December 2014. To learn more about the programme and start building your team, visit www.oxbridgebiotech.com/onestart.