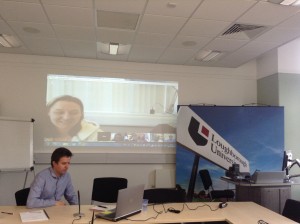 A colleague and I took part in a Google Hangout session yesterday with six other people from other institutions. Google Hangout is a video chat tool.  I was a bit weary about using this at first because a) I’ve never used it before, and b) there were 10 people expected at this virtual meeting so I wasn’t sure how this would be controlled.

In the past, when I have taken part in virtual gatherings, it has gone one of two ways; either one or two members predominantly speak for the duration of the session or second, everyone is talking over one another and it just turns into a bit of a mess. Fortunately, though, this session worked really well. The sound quality was excellent, as was the video. We didn’t experience any latency issues with sound (despite the fact we were using wifi) whereas this has been an issue with specific web conferencing tools such as Blackboard Collaborate we have used in the past.

Everyone got an opportunity to speak, and there was a 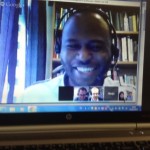 common understanding of virtual meeting protocols which kept things in order (this may be because we are all in a Learning Technologist or similar kind of role). We quickly realised the importance of the need to mute, or unmute, when you are not talking (talking), otherwise you will be distracted by the constant video change when sound is picked up from another mic.

Aside from conducting virtual meetings via Google Hangouts, and using it privately with friends and family, you can join other publicly accessible Hangouts ranging from Language Practice Hangouts to paid-for hangouts offering live cooking classes!

Which video chat facility do you like to use with your colleagues and/or students? Please let me know below.