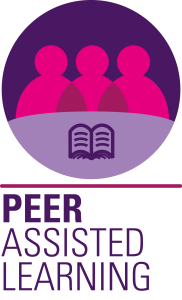 When someone [other than a lecturer] explains it, because it’s us – the students − explaining it to other students, normally the explanations aren’t great. But that’s good, because they explain it once, and you’re like, “I’m not sure I get that” and then the student leader will go over it again. And then, because you’ve had that explanation twice, first with a bit of uncertainty and then with a proper explanation afterwards, it makes so much more sense, I think.

The Loughborough University PAL scheme was launched in 2011 as an initiative to provide regular peer-assisted learning support for second year Mathematics students.  The goal was to address the “cooling off” phenomenon many students experience in their second year of study, when the difficulty of their course increases, but the level of available support has decreased from the first year.  The project coordinator, Prof Tony Croft of the MEC, together with two second year Mathematics lecturers, worked with four student interns over the summer of 2011 to develop materials for the scheme. Launched that autumn with 13 trained peer facilitators, the scheme has continued to run in each subsequent year.

The scheme consists of optional weekly sessions that support the module learning, timetabled for all students on the modules and independent of formal lecture and tutorial times.  The scheme is staffed and run by students from the third and fourth years who have previously taken the modules involved, then have undergone training developed based on the Supplemental Instruction Model developed at the University of Missouri, and run by Student Voice.  The peer facilitators who run the sessions use techniques that enable students to go over the content from the module and the lectures in a way that encourages deep learning through discussions with other students and facilitators. Feedback from students attending the sessions indicates that they appreciate that the facilitators have experienced the modules as students and know how it feels if a concept is a bit tricky to get your head around. The sessions are informal and all about extra time with others on the module to work through the content.  Analysis carried out by Duah, Croft and Inglis on PAL participation indicates that each session raises students’ final module marks by an average of 1%.

Since its original creation, the management of the PAL Scheme has been taken over by Student Voice, and been extended additionally to students in Politics, History and International Relations.